I'm a cinephile. Studied film in college and got to review movies for a TV station (don't get excited; it was way back in the 20th century). When my Netflix queue swelled to over 400 titles, I gave myself an assignment: watch 50 films that I've never seen before and write something about them. I'll be watching a little bit of everything -- Oscar bait, indie darlings, black & white classics, cult flicks, blockbusters, big-budget flops and weird shit my friends have been recommending for years. 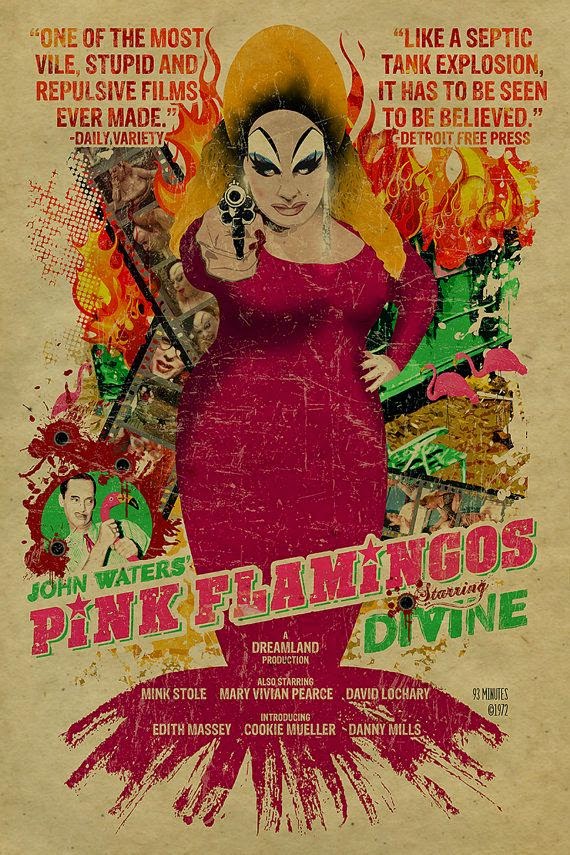 Here's the original theatrical trailer with an intro by director John Waters that was added for the 25th anniversary release in 1997...


What the Queer Cinephile Says: First, a bit of history, so bear with me. After the release of some sexually daring films and a series of off-screen scandals in the 1920s, Hollywood came under scrutiny by politicians and religious leaders. Fearing censorship from outside the industry, the Motion Picture Producers and Distributors of America (MPPDA) decided that self-sanitization was the answer and they assigned Will H. Hays to develop a set of moral censorship guidelines for movie studios. What, you rightfully ask, made Will H. Hays the right man for the job? He was a former chairman of the Republican National Committee (1918-21), the U.S. Postmaster General under President Warren G. Harding (1921-22), and a Presbyterian elder. Also, he just happened to already be the president of the Motion Picture Producers and Distributors of America. Yeah, Hollywood and Washington, D.C. have always been strange bedfellows.

Hays developed the Motion Picture Production Code, more popularly known as the Hays Code. Although promoted publicly as a voluntary set of guidelines, filmmakers quickly learned it was mandatory if they wanted their films to play in American theaters. From the early 1930s to 1968, American-made movies were supposed to be governed by three principles: (1) No picture shall be produced that will lower the moral standards of those who see it. Hence the sympathy of the audience should never be thrown to the side of crime, wrongdoing, evil or sin. (2) Correct standards of life, subject only to the requirements of drama and entertainment, shall be presented. (3) Law, natural or human, shall not be ridiculed, nor shall sympathy be created for its violation. A little imprecise, right? Not to worry. Hays more explicitly outlined a couple of dozen things filmmakers should just not show us, like nudity, suggestive dancing, sex perversion, childbirth, miscegenation, excessive and lustful kissing, vulgarity or profanity, capital punishment or cruelty to animals and children. It was also not okay to ridicule religion, undermine the sanctity of marriage or disrespect the flag.

Filmmakers creatively navigated the strictures of the Hays Code for decades, but by the late1950s, almost every guideline had been teased, stretched or willfully ignored. Ultimately the Hays Code was replaced by the Motion Picture Association of America's rating system in 1968 -- what moviegoers now know as G, PG, PG-13, R and NC-17. There was an X rating in the beginning, but after it became widely associated with pornography only, it was replaced with NC-17. Consider this trajectory: Two of the most popular films of 1959 were Pillow Talk and Some Like it Hot, very ribald comedies that proved filmmakers and American audiences had moved on already. Less than a decade later, Midnight Cowboy (1968) became the first major studio release to earn an X rating. It won the Best Picture Oscar and was re-released with an R rating. Meanwhile, a budding young filmmaker named John Waters spent the 1960s making a series of no-budget short films in Baltimore, Maryland, with an outlandish collection of friends and local actors. Drawn to "forbidden subject matter," Waters successfully illustrates what that means to him with Pink Flamingos, easily one of the most notorious and controversial movies ever made. It's almost as if John Waters sat down with a copy of the Hays Code and wrote a script that painstakingly flouts 97% of the guidelines -- then decided to add some things that were probably inconceivable to Will H. Hays.

As the film opens, on-the-lam criminal Babs Johnson (played by plus-size drag queen Divine) is living off the map in a trailer outside Baltimore with her pervy son, Crackers, her feeble, playpen-bound, egg-obsessed mother, and a kinky female hanger-on named Cotton. According to tabloids, Babs is The Filthiest Person Alive, but a Baltimore couple -- Connie and Raymond Marble -- beg to differ. After all, they operate an illegal adoption agency that imprisons and impregnates women and sells their offspring to lesbian couples. Dismissing Babs as "a common thief and murderer," Connie and Raymond scheme to become known as The Filthiest People Alive. Over the course of roughly 90 minutes, this rivalry involves exhibitionism, cop-killing, rape, something close to bestiality, incest, cannibalism, castration and coprophagy. Go on, Google that last one. Or let me help you: John Waters has a disturbing preoccupation with feces.

Waters originally called Pink Flamingos "an exercise in poor taste." His goal was to shock you with the grossest visuals and sickest humor he could dream up and get on film. He succeeds. If you don't already know what repulses you, see this and you will know conclusively what does. I also suspect that after watching this, you will wish there was at least one thing you could unwatch. So, reviewing Pink Flamingos in a conventional way doesn't make much sense, but I'll try. The photography is lifeless, the camerawork is sloppy and uninspired, and I've seen better performances in church plays (although it has to be acknowledged that Divine's work as Babs Johnson is uninhibited, persuasively ruthless and impressively manic). There are genuinely hilarious situations and gags, but Waters is completely unfamiliar with the concept of less is more.

Still, as assertively disgusting as it is, I admire Waters for his unapologetic attitude and the perseverance it must have taken to get his vision on screen. The script for Pink Flamingos could have languished in a drawer for decades, never produced, but John Waters got dozens of people to collaborate with him on an experiment in defiantly transgressive, anarchic filmmaking. In Baltimore, Maryland. Pink Flamingos cost about ten thousand dollars to make and Waters chose a very unorthodox distribution model: he screened it at universities across the United States. Campus by campus, the film's notoriety surged. It eventually got a limited studio release, but it won a devoted cult following thanks to its availability on home video in the early 1980s and innumerable midnight showings over the last four decades.

Stray Gay Observations: Pink Flamingos is one of those movies I'm supposed to love because I'm gay. Other films I'm supposed to love simply because of my sexual orientation include The Women, All About Eve, What Ever Happened to Baby Jane?, The Rocky Horror Picture Show, Mommie Dearest, Steel Magnolias, The Adventures of Priscilla, Queen of the Desert and Sordid Lives. I think I will take this opportunity to let you know how I feel about all of them.  The Women and All About Eve are outstanding films that I love and admire very much; I can watch them anytime. I don't really need to see Rocky Horror again -- I think it only works as a midnight movie experience; been there, done that. Look beyond the flamboyant, Oscar-winning costumes in Priscilla and it's a surprisingly moving tale with an estimable amount of humanity. Baby Jane is unjustly categorized as camp; it's really a dark comedy that successfully morphs into a chilling psychological horror movie by its end. I loathe almost every frame of Steel Magnolias, a film so artificial and turgid that it can't even be saved by the down-to-earth charms of Dolly Parton. Sordid Lives is an absurdist train wreck -- you really can't look away. And finally, I will probably go to my grave believing that Mommie Dearest is the best worst movie ever made.

Should You See It? Late in the film, Divine tells the media, "Filth are my politics! Filth is my life." She's not kidding. You don't recommend this movie; you warn people about it. Pink Flamingos is all the things John Waters wanted it to be: shocking, twisted, sickening, and really, really funny. It's also a bit of an endurance test. Now that I've seen it, I never want to see it again.

Email ThisBlogThis!Share to TwitterShare to FacebookShare to Pinterest
Labels: an exercise in poor taste, coprophagy, Divine, John Waters, one of the most vile stupid repulsive films ever made, Pink Flamingos, Pink Flamingos review, The Filthiest Person Alive, The Queer Cinephile