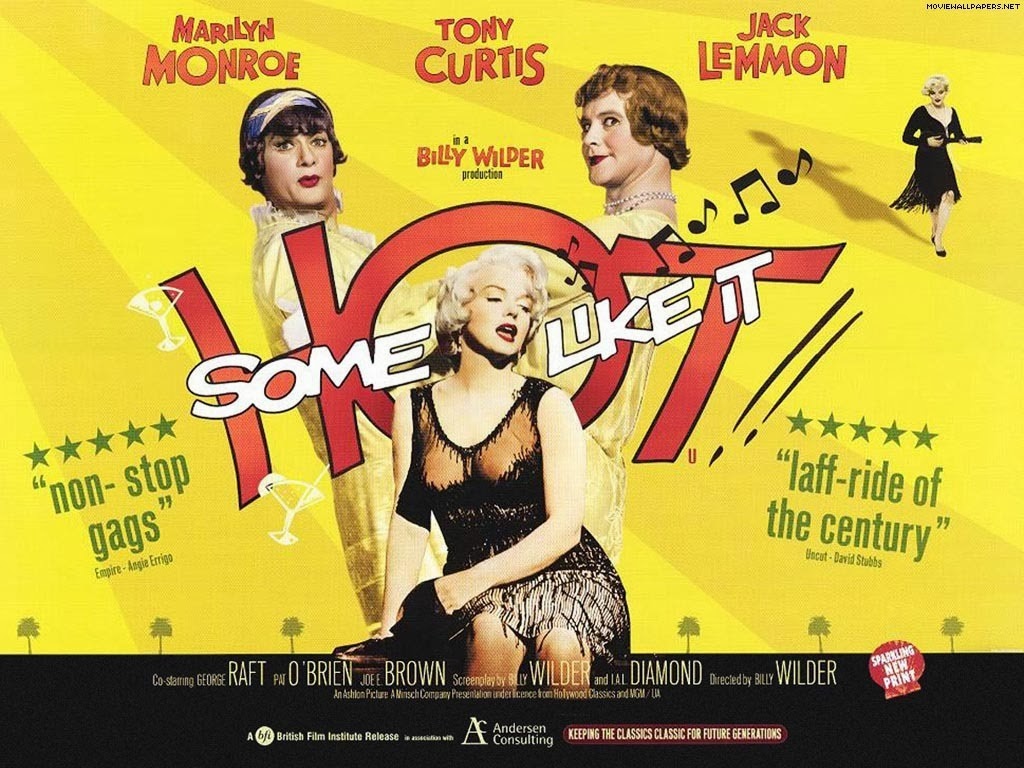 What the Queer Cinephile Says: A little research revealed that Some Like it Hot was an updated American version of a 1935 French film (Fanfare d'Amour) that had already been remade by a German filmmaker in 1951 (Fanfaren der Liebe). The funny thing about the trailer for Some Like it Hot is that it doesn't even bother explaining the plot to you. It simply promises action, comedy and Marilyn Monroe. And if that's not good enough for you, the overzealous narrator emphasizes: "You've never laughed more at sex, or a picture about it." I was genuinely surprised to hear the film promoted that way for audiences in 1959. I mean, the guy actually says sex, and suggests that it's perfectly okay for you to bust a gut over the subject. Radical.

How popular was Marilyn Monroe? In the '50s, Marilyn Monroe made 21 films and appeared on dozens of magazine covers. Her career even survived the notoriety of appearing nude in the first issue of Playboy magazine in 1953. She gets top billing for Some Like it Hot despite the fact that she shows up almost a half hour into the picture and co-star Jack Lemmon was already an Oscar winner.

The plot goes like this... It's February in Chicago, 1929. Two hungry, broke, indebted musicians (Tony Curtis and Jack Lemmon) need a job. The situation is so bad that when Lemmon's character, Jerry, learns of openings for sax and bass players in an all-girl band headed to a gig in Florida, he momentarily considers donning women's clothes as a plausible way to make money. Curtis, as Joe, calls him crazy. But after they accidentally witness a mob hit, better known historically as the Saint Valentine's Day Massacre, and narrowly escape death themselves, Joe becomes desperate enough to believe that disguising themselves as women -- Josephine and Daphne -- is the perfect way to evade the mobster who wants to kill them. So, they head to a Florida resort by train with Sweet Sue and Her Society Syncopators, a band that includes vocalist Sugar Kane (Marilyn Monroe). Joe and Jerry are both attracted to Sugar, rivalry builds, complications ensue and the mobster who wants to kill them them -- "Spats" Colombo -- coincidentally winds up at the same resort. Yes, it's a farce.

Some Like it Hot was nominated for six Academy Awards and landed on top of the American Film Institute's list of the 100 funniest films of all time back in 2000. Another cross-dressing comedy, Tootsie (1982), is one of my top ten favorite films ever, so I approached this film with a mixture of enthusiasm and skepticism. In the first 20 minutes of Some Like it Hot we're simultaneously introduced to Joe and Jerry as well as the mobster and his gang. When everyone ends up in the same parking garage and the submachine gun massacre of seven men happens, it felt like a tonal shift upon which no comedy could survive. Wrong. Within minutes, the guys are in dresses. Marilyn Monroe makes her entrance and director Billy Wilder deftly crafts a lively farce.

Jack Lemmon has quite a bit of fun as Daphne, courted by daffy millionaire Osgood Fielding III (Joe E. Brown in the film's best supporting role). Monroe is remarkable -- funny, sexy and clueless, but then surprisingly vulnerable and genuinely touching. She gives a pitch perfect performance here, managing to still be the one you want to look at even when she's talking to two men in dresses. Tony Curtis, who never achieved the fame or popularity of his co-stars, is great. He's Joe, a bit of a womanizer, then the classy Josephine, and finally Junior, a phony oil tycoon persona he adopts (complete with preposterous Cary Grant vocal inflections) in order to chase Sugar. Lemmon may have gotten a Best Actor Oscar nomination for his role, but I'd argue that Curtis does comparable work.

On the train to Florida, Sugar rehearses a song with the band. When she sings the lyric, "Feelin' gay, reckless, too," I was reminded that once upon a time, gay meant something else entirely.

Tony Curtis is pretty convincing as a woman. Lemmon, not so much. I got a kick out of the way Curtis kept puckering his lips in an attempt to give his mouth a more feminine appearance.

Considering the amount of gender flip-flopping and drag in this film, plus one ostensibly same-sex kiss, it's rather amazing it got made in America in 1959. And I wouldn't dare spoil the ending -- you need to see that for yourself -- but it must have surely befuddled plenty of moviegoers.

After the mobsters show up at the resort and share an elevator ride with Josephine and Daphne, the two scurry back to their room in a panic. Lemmon delivers his best line: "...the cops are gonna find two dead dames, and they're gonna take us to the lady's morgue and when they undress us, I tell you, Joe, I'm gonna die of shame!"

The Lust Factor: Someone has to say it: Tony Curtis had a nice ass. In pants or a dress.

Should You See It? Screwball comedies and farces aren't for everyone. If you're the kind of person who spends two hours tugging at the loose threads of a movie, this one will unravel pretty fast. If it's going to bother you that these two broke musicians show up at the train station in dresses, wigs and full makeup carrying suitcases full of women's clothes with no explanation for how they could possibly afford any of that, then skip it.

However, if you've heard of Marilyn Monroe, but haven't seen any of her films, this is a good place to start -- it's a quintessential role and she's magnetic. In interviews, Jack Lemmon has confirmed that many people advised him to pass on the role because putting on a dress would ruin his career. Watch his performance knowing that and you will see a man doing something pretty fearless in 1959. He looks like he's having a blast.

There had been cross-dressing comedies before (Cary Grant's I Was a Male War Bride in 1949, for instance), but this is the one that really upset people in Kansas (who wanted it banned not for the drag, but for the lusty interplay between Curtis and Monroe). And along with a handful of other films around the same time, Some Like it Hot contributed to the eventual demise of Hollywood's restrictive production code that forbade a variety of scenarios and subjects from ever being depicted. Initially voluntary, the code was ultimately mandatory... and a pain in the ass for screenwriters and directors. To read a short article about the code -- it's history, implementation and abandonment -- go here.

Bottom line: To a 21st century viewer, Some Like it Hot will probably feel occasionally labored (as many farces tend to be), but when it works, it's snappy good entertainment. Few movies can be described as cynical, sweet, sexy, broad, silly, sophisticated and optimistic all in the same sentence.