The Queer Cinephile(s) #16: Singin' in the Rain 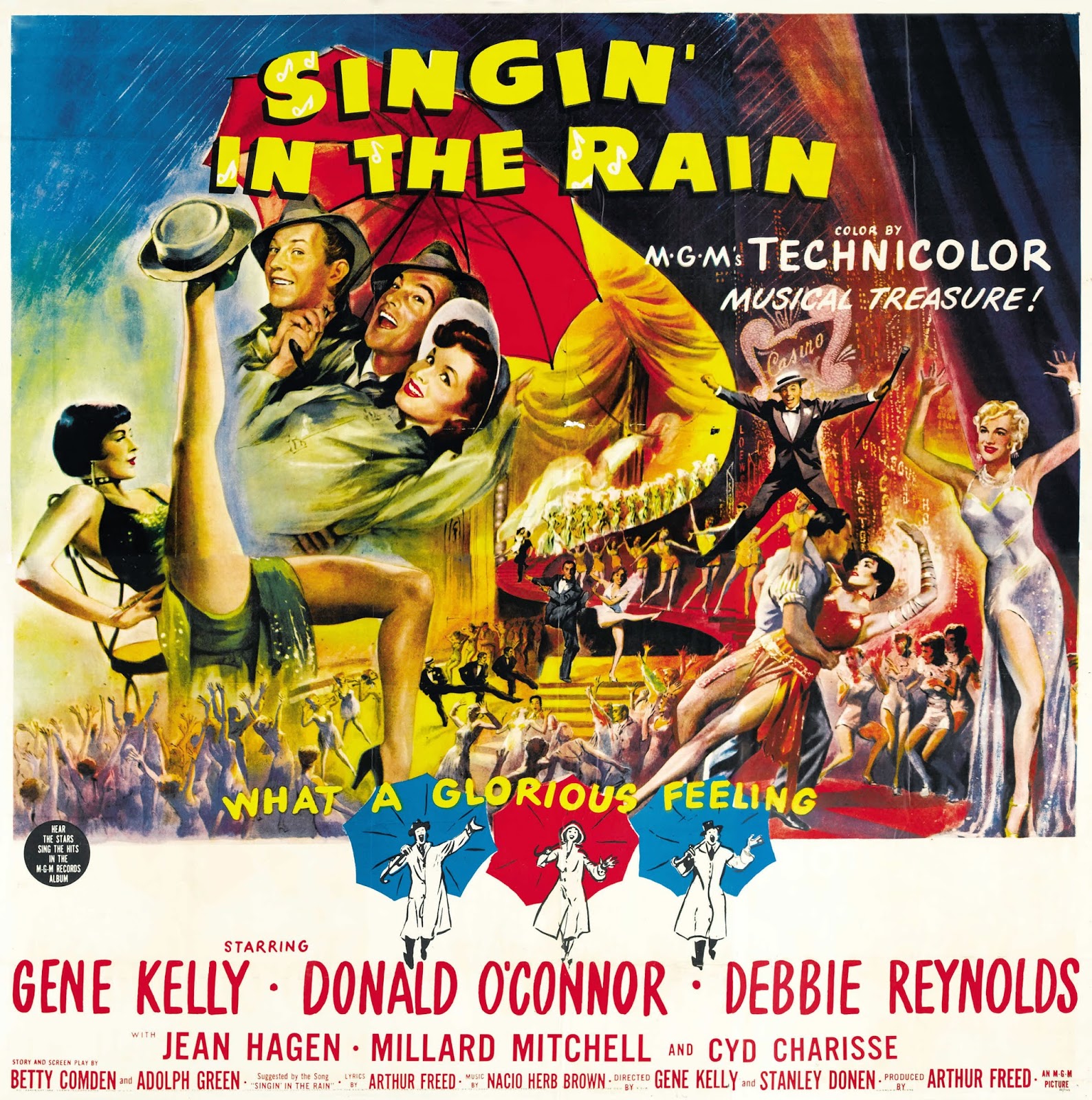 What the Queer Cinephile Says: In 1999, I discovered a box of old movie sheet music while poking around an antique store. I didn't care about finding music -- I was actually looking for some great vintage Hollywood artwork to frame. And suddenly there was Joan Crawford striking a flirty pose on the cover of some sheet music for "Chant of the Jungle," a tune written for 1929's Untamed -- her first talking motion picture. I bought it immediately, for $9. When I got around to removing it from the plastic envelope, I found that the music and lyrics for "Singin' in the Rain" were included along with "Chant of the Jungle." I was confused. Untamed was made in 1929, but Singin' in the Rain, the movie, was not made until the early 1950s. Turns out the song has been around since Hollywood's transition from silent to sound pictures in the late 1920s. It's featured in MGM's Hollywood Revue of 1929, which also stars Joan Crawford and a bevy of the studio's popular contract players. I found a clip from that film on YouTube:

Singin' in the Rain is set in 1927, the pivotal year that Hollywood made its first significant steps away from silent films to talking pictures. First there were synchronized orchestral scores and sound effects, then synchronized dialogue and songs. When up-and-coming MGM screenwriters Betty Comden and Adolph Green were kicking around ideas for their third script together in 1951, they had the brilliant idea of writing something about the tumultuous evolution from silent to sound pictures. Surrounded by seasoned MGM personnel with lots of stories from that era to tell, Comden and Green found plenty of inspiration for a plot. And since they had access to MGM's extensive vault of music, they made it a musical built around a collection of old songs. Incredibly, "Singin' in the Rain" had already been featured in about a dozen films!

Gene Kelly and Jean Hagen play Don Lockwood and Lina Lamont, wildly popular silent film stars that the studio publicity machine falsely depicts as a romantic couple off screen. Diva Lina likes the idea of having a dashing paramour for movie premieres; she's oblivious to Don's explicit insistence that there's nothing between them, "Just air." When an accidental encounter with aspiring young actress Kathy Selden (Debbie Reynolds) lights a romantic spark in Don, Lina gets insanely jealous. But these two stars have bigger problems: In the middle of shooting The Dueling Cavalier, the studio head bursts onto the set and stuns everyone by turning the production into the company's first talking picture. "You do what you always did. Just add talking!" Beautiful Lina Lamont has a face for pictures, but not a voice. The sound coming out of her mouth is a vinegar-infused helium squeak. When a preview audience rejects the picture and disparages both stars, Don desperately seeks a way to save his career. His old vaudeville partner and best friend, Cosmo (Donald O'Connor), suggests that Don get back to what he does best: singing and dancing. They hatch a plan to convince the studio to change Dueling Cavalier to Dancing Cavalier, add some songs, and have Kathy dub all of Lina's dialogue and singing.

The film is uncomplicated, leaving plenty of room for a series of captivating songs and production numbers -- all of which are splendid even when they don't necessarily advance the plot. For instance, Donald O'Connor's "Make 'em Laugh" number is a wondrous, vigorous, you-have-to-see-it-to-believe-it fusion of acrobatics and slapstick -- a showstopper in a film filled with them -- but it appears to exist solely to prove that O'Connor is a ferociously talented goofball. Similarly, when Don, Cosmos and Kathy perform the sensationally buoyant "Good Morning," it really has nothing to do with anything plot-wise, but it's very satisfying to watch Debbie Reynolds keep up with O'Connor and Kelly. Sometimes song and dance are a little more organically integrated, replacing dialogue and augmenting the characters' emotions. For instance, Don's diction and elocution class -- which turns into a boisterous, tongue-twisting duet with sidekick Cosmo -- is a clever juxtaposition to Lina's hilariously abortive efforts at refining her voice. And Don and Kathy's developing romance is primarily expressed through music and movement. Early on, Don sings "You Were Meant For Me" to Kathy. He likes her. It's a perfectly charming but restrained scene that features a pas de deux with the tentative young woman. Later, his burgeoning love for her is fully revealed via "Singin' in the Rain." Soaked by fake rain on one of those streets that only exist in a Hollywood studio backlot, Gene Kelly's rendition of the title tune is simultaneously earnest and euphoric. The choreography is elegant, but exuberant. There's a reason people respond to this scene: it's completely relatable, yet somehow transcendent.

For me, one of the most interesting things about Singin' in the Rain is how co-directors Kelly and Stanley Donen approached the material. The film is ostensibly about one of the rockiest periods in Hollywood history (the introduction of sound doomed many careers), but they skip the reverence entirely and bring the humor by way of satirization, spoof and a gleeful skewering of stardom. There's the romance between Don and Kathy, sure, because that's an obligatory component of musicals from this era, but it's regularly upstaged by the obsessive love affair all these characters are having with filmmaking itself. And I really admire Gene Kelly for audaciously breaking the fourth wall numerous times, looking directly at the camera and brazenly acknowledging the audience, as if to reassure us that the film's impudent tone is premeditated.

Stray Gay Observations: In 1952, people loved Donald O'Connor's character, Cosmo -- the man who adds a few somersaults to his big dance number and casually invents lip-syncing to save Lina Lamont's career ("She can't act, she can't sing, she can't dance. A triple threat!"). He even won a Golden Globe for his performance as Gene Kelly's ebullient, quippy sidekick. If you released a picture like this today, the somewhat epicene O'Connor would almost certainly be described in every review as Kelly's gay best friend.

Debbie Reynolds (all of 19 when she made this) is awfully plucky here. That's a compliment; I love plucky women. And plucky will usually get you further in life than spunky.

From what I've read, Gene Kelly (1912-1996) was a perfectionist and a tyrant... which is probably the only way to become Gene Kelly.


Should You See It? Singin' in the Rain was a modest success in 1952, earning two Oscar nominations -- a richly deserved Best Supporting Actress slot for Jean Hagen as Lina Lamont, and a curious nod for Best Original Score even though there were only two original songs written for the film. It may have been promoted as MGM's "Technicolor Musical Treasure," but it took a while to emerge from the shadow of Kelly's An American in Paris. Made the year before Singin' in the Rain, Paris collected six Academy Awards, including Best Picture, and earned Kelly an honorary Oscar for "his versatility as an actor, singer, director and dancer, and specifically for his brilliant achievements in the art of choreography on film." But the longstanding consensus is that Singin' in the Rain is the greatest movie musical ever made. People may enjoy and admire An American in Paris, but they love Singin' in the Rain with an effusive passion. When the United States Library of Congress established its National Film Registry in 1989, Singin' in the Rain was among the first 25 films to be deemed "culturally, historically, or aesthetically significant" and selected for preservation. It would take four more years for An American in Paris to receive the same acknowledgement.

I've enjoyed plenty of musicals, but I'm rarely enthusiastic about the genre. Singin' in the Rain is brisk, energetic and mirthful (I don't think I've ever used that word before in my entire life). See it on the big screen, if possible; it's the best way to appreciate the amusingly stylized period costumes by Walter Plunkett and the incredible, forthrightly staged and minimally edited song and dance sequences.

As I watched Singin' in the Rain, I was reminded of 2011's The Artist, a film that also tackles the subject of Hollywood's transition from silent to sound pictures. It's a far less inventive film that relies heavily on it's gimmicky faux-silent movie conceit and the antics of a trained dog. I actively disliked The Artist. It won the Best Picture Oscar. But unlike Singin' in the Rain, I doubt anyone will be talking about it, watching it, or writing about it in 60 years.