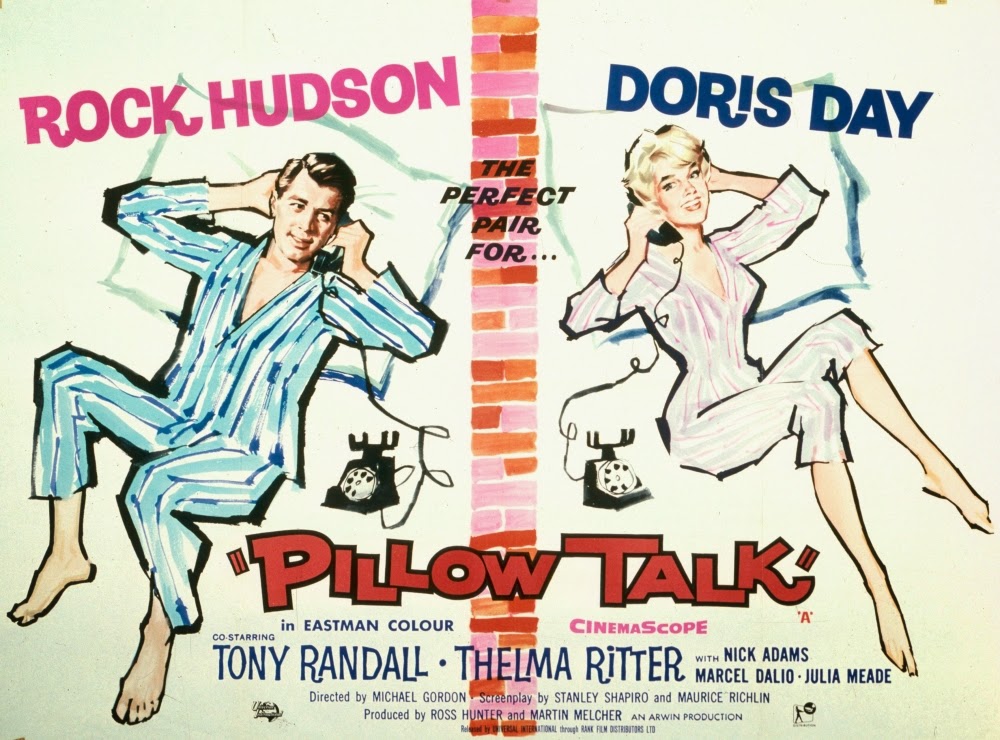 What the Queer Cinephile Says: If I was a film professor, I'd make my classes watch Pillow Talk for a variety of reasons. It was a huge hit that's generally recognized as the quintessential contemporary bedroom comedy of its day. It proves that the widescreen formats of CinemaScope or Panavision could elevate comedies, not just musicals or spectacles like Ben Hur. But I'd really, really want to show a roomful of smartphone-addicted young adults this movie because the entire plot is propelled by a mostly forgotten twentieth century communications configuration known as the "party line." In other words, two or more customers were connected to the same telephone line and were expected to share nicely. Monopolizing and eavesdropping ensued.

In Pillow Talk, uptight, career-minded interior decorator Jan (Doris Day) shares her line with self-possessed songwriter and womanizer Brad (Rock Hudson). She wants to make business calls from home, but he's always crooning the same love song to a bevy of beautiful women he's bedded or planning to bed. Jan takes her concerns directly to the phone company: "Have you any idea what it's like to be on a party line with a sex maniac?" I'm pretty sure Doris Day's delivery of that line has only gotten funnier with age. Her gripes backfire when the phone company sends a female inspector to have a chat with Brad; Jan's complaints are deemed unwarranted because Brad is "extremely cooperative." Thanks to the phone company, Brad now knows Jan's full name and how to call her directly -- which he does, infuriating her further by suggesting that she stop taking her own "bedroom problems" out on him.

If you're enjoying the crackling chemistry between Day and Hudson before they even meet face to face onscreen, it's a lot easier to accept the string of convenient coincidences that occur when they do. Brad accidentally learns who Jan is, then decides to have some fun with her by pretending to be a Texan named Rex Stetson -- complete with a ridiculous accent and a propensity for saying things like, "You make me feel warmer than a potbellied stove on a frosty morning." Feelings happen, songs are sung and Jan discovers the scam in a pretty ingenious way. Hell hath no fury like an interior decorator scorned.

Doris Day had made comedies before Pillow Talk, but this is where she hit her stride; the film revitalized her career and led to her only Oscar nomination. A string of box-office hits followed, but thanks to a deal negotiated by her late husband, she ended up contractually bound to star in an amusing but unremarkable TV sitcom in 1968. Rock Hudson made a string of serious pictures in the 1950s -- Magnificent Obsession, All That Heaven Allows, Giant, Written on the Wind -- so Pillow Talk was a real departure for him. His character is a scoundrel. In a romantic comedy. It takes a skillful actor to walk that line or an audience won't play along. Hudson delivers; it's a sexy, funny, mischievous performance. Like Day, he ended up on TV in the 1970s, enjoying quite a bit of success playing a police commissioner in McMillan & Wife, making various miniseries and even guest starring on Dynasty before his death in 1985.

Stray Gay Observations: In July of 1985, Rock Hudson appeared at a press conference to promote Doris Day's Best Friends, a talk show hosted by his former costar. His appearance had deteriorated so much since an April episode of Dynasty (his last role) that the public was stunned. Three months later, Hudson died of complications from AIDS, leaving the world to process the fact that one of Hollywood's most recognizable and beloved leading men was a closeted gay man. Arguably, Rock Hudson gave AIDS a real face at a time when most Americans were content to believe it was only happening to "those people." It was early in my career at CNN, but I remember the media frenzy pretty vividly and it was an ugly time in journalism. After a particularly grueling work week, I went home to visit my parents and during a quiet moment with my mother, I asked, "Did you ever think Rock Hudson was gay?" "No," she said. "No one did." Rock Hudson had done his job: he played a  heterosexual persuasively over and over again.

Knowing all this, I did experience a couple of queer moments while watching Pillow Talk. For instance, there's a scene where Hudson/Brad's best friend, played by Tony Randall, expresses his concern over Brad's womanizing ways: "You ought to quit all this chasing around. Get married." To which Hudson/Brad replies with a perfectly straight face: "Why?" It's a wee moment of cinematic nirvana.

There's a later scene in which Hudson, pretending to be perfect Texas gentleman Rex Stetson, screws with Jan's head by doing a couple of stereotypically gay things that will confuse her about his sexuality as they sit in a piano bar called The Hidden Door (which incidentally happens to be a real gay bar in Dallas, Texas). And then you realize that you're watching a gay man play a straight man pretending to be a gay man in a piano bar called The Hidden Door. To undo his mischief, he plants a long, sensual kiss on Jan. It's a rather extraordinary thing to behold.

Should You See It: Yes, but not because I think it's a great movie. It's not. The plot depends on far too many contrivances. Doris Day does a little bit too much mugging for the camera. And one of the funniest things about this movie is not necessarily the dialogue, but rather the way it nonchalantly depicts Jan's lifestyle: she can afford a comfortable New York City apartment, a maid and a spectacular designer wardrobe on an interior decorator's salary. Though to be fair, there's a point where her lifestyle becomes an unintentionally hilarious running gag for the modern viewer. Then, why see Pillow Talk? The pure chemistry between Doris Day and Rock Hudson. The scene-stealing work of character actress Thelma Ritter as Jan's perpetually hungover maid. The gowns by costume designer Jean Louis. And the snappy musical score, featuring the title tune and an insanely catchy number called "Roly Poly."

Pillow Talk can (and should) also be appreciated for how it functions as a Hollywood time capsule -- this is the apogee of slick, profitable filmmaking circa 1959. It also manages to successfully update the overworked screwball comedy formula of the 1930s and '40s -- and was rewarded for that with an Oscar for Best Original Screenplay. I think it's also important to remember that Pillow Talk hit theaters around the cusp of the American sexual revolution. What looks old-fashioned to us today, was almost entirely fresh to moviegoers of the late 1950s. You really can't find another movie quite like this in that entire decade.

Sure, you can shrug this off as the silly story of a sexually repressed woman who just needs to be liberated by an uninhibited man. Then again, it does appear to mostly reinforce the notion that a woman can have it all, including a man, if that's what she wants. From the opening scene, Jan is depicted as successful and desirable, a woman with integrity who's not inclined to settle for anything but true love. It's randy bachelor Brad that changes, and not because of any manipulation or scheming on Jan's part. I'd say Americans were pretty lucky to have Doris Day and Rock Hudson escort them into the 1960s.