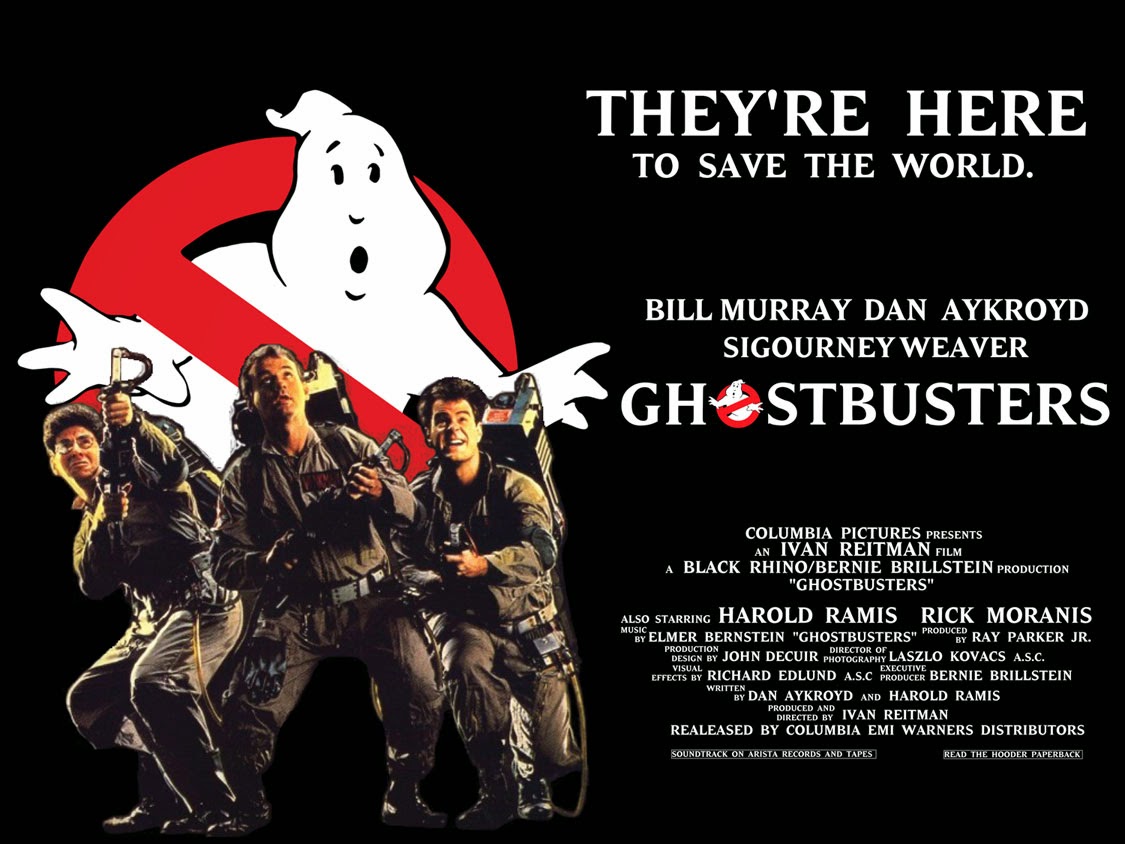 Here's the theatrical trailer for one of it's recent re-releases...

What the Queer Cinephile Says: Before I dive into my commentary on Ghostbusters, I want to make some observations about the birth of the summer movie blockbuster. Steven Spielberg's Jaws (1975) is widely regarded as the original one. Universal Pictures devised an innovative marketing plan to strategically position the film as an event -- there was a media blitz of promotion, including an unprecedented amount of money spent on television advertising. People flocked to theaters, records were broken and a cultural phenomenon was born. Jaws made more money than The Godfather (1972) and The Exorcist (1973), films that had been released in March and December, respectively. Because of its success, many movie studios and producers were readily determined to follow Universal's marketing model and deliver a blockbuster event picture every summer.

Jaws is a great movie; did it need unparalleled promotion to succeed? We'll never know if old-fashioned, word-of-mouth buzz would have made it a blockbuster, but my conclusion is a definitive "yes." Making movies has always been a dizzying collision of art and commerce, but Jaws represents a turning point for the industry. Once dubbed "the dream factory," Hollywood dinged that adulatory euphemism by obsessively seeking to manufacture cultural phenomenons after Jaws. And they did it with considerable zeal. Still do.

Take a look at the top ten grossing films of the 1980s: E.T. the Extra-Terrestrial (1982), Star Wars Episode VI: Return of the Jedi (1983), Star Wars Episode V: The Empire Strikes Back (1980), Batman (1989), Raiders of the Lost Ark (1981), Ghostbusters (1984), Beverly Hills Cop (1984), Back to the Future (1985), Indiana Jones and the Last Crusade (1989) and Indiana Jones and the Temple of Doom (1984). With the exception of Beverly Hills Cop, a December release, the rest were positioned as summer blockbusters. After the enormous success of Beverly Hills Cop, it's two sequels became summer releases. I only saw five of these in theaters, so perhaps I'm not particularly susceptible to the lure of an overhyped summer blockbuster-to-be.

When I started this series, I decided to deliberately choose some films I've never had any interest in seeing. Like Ghostbusters. Why have I been avoiding this picture for thirty years? Back in 1984, there was about a six month period where the Ghostbusters logo was everywhere and the movie was heavily promoted in a way that made me think it would be silly and terrible, or terribly silly at best. Plus, the fatuous theme song and its abominable music video were all over radio and MTV -- I hate them both without reservation. I'm surprised former vice president and notable warmonger Dick Cheney never incorporated the song into a list of "enhanced interrogation" methods and had it played on a continuous loop for Guantanamo Bay detainees.

Ghostbusters stars Bill Murray, Dan Aykroyd and Harold Ramis as university professors whose paranormal grant work is terminated by a pompous dean. "Your theories are the worst kind of popular tripe. Your methods are sloppy and your conclusions are highly questionable." He fires the apparently untenured trio, so they decide to go into business as professional paranormal investigators who specialize in the elimination of things that go bump in the night... or day. Their TV ad -- "Have you or anyone in your family seen a spook, specter or ghost?" -- appears just in time to help the residents of New York City deal with all kinds of supernatural unrest. One such resident is Dana (Sigourney Weaver), whose refrigerator has become the portal for a demonic spirit named Zuul. With a deadpan tone that infuses the whole movie, Bill Murray muses, "Generally, you don't see that kind of behavior in a major appliance."

Armed with proton backpacks and "neutrona" wands (essentially laser flamethrowers), the busters turn the capture and containment of ghosts into a lucrative, high-profile business. But this is a movie in desperate need of some conflict, so an Environmental Protection Agency agent (William Atherton) accuses them of unlicensed waste handling or something, and orders the deactivation of their ghost containment system. That releases all kinds of demons and spirits right back into an unsuspecting New York City. Dana is possessed by refrigerator demon Zuul and her nerdy neighbor (the very funny Rick Moranis) succumbs to a malignant entity called Vinz Clortho. Together, they release a harbinger of destruction named Gozer, an unpleasant ancient god once worshipped by the Hittites, Mesopotamians and Sumerians around 6000 B.C. And all this leads to the film's singularly brilliant scene in which a giant marshmallow man lumbers through the streets of New York like Godzilla.

Ghostbusters was written by Dan Aykroyd and Harold Ramis as a vehicle for Aykroyd and John Belushi, who'd parlayed their Saturday Night Live gigs into feature film success with 1980's The Blues Brothers. But Belushi died in March of '82, and then John Candy and Eddie Murphy declined roles that had been written specifically for them. Meanwhile, director Ivan Reitman determined that the film was going to cost a lot more than it's proposed $30 million budget. Aykroyd and Ramis had to rewrite the entire script. Somewhere in the process, everyone generously handed the picture to Bill Murray. Aside from the aforementioned marshmallow man, Murray is the main reason to see this. His performance is skillfully supercilious. At one point, Sigourney Weaver's Dana tells him, "You don't act like a scientist. You're more like a game show host." Well, yes.

The pre-CGI special effects are actually a lot of fun, too. According to the DVD extras, the Ghostbusters crew was filled with people who'd created effects for 1982's Poltergeist. Their challenge was to give scary apparitions and demons a comedic makeover. These are pretty kid-friendly effects, with maybe one or two exceptions. And then there's the giant Stay Puft Marshmallow Man, a fanciful creation accomplished by putting a real human being inside a goofy suit and surrounding him with miniature cars, trees and buildings. It's fantastically stupid and a perfect fit for this film.

Stray Gay Observations: In a queer alternate universe, the Stay Puft Marshmallow Man would marry the Michelin Man and adopt the Pillsbury Doughboy.


Should You See It? To me, Ghostbusters mostly shuffles from scene to scene with a kind of clumsy indifference to coherent storytelling. And for a comedy, the direction and pacing are awfully lazy. There's a halting deference to Bill Murray's character that undermines the development of almost every other character in the film. Harold Ramis, a fine actor, is underutilized, and Dan Aykroyd seems uncertain how to play a character he himself wrote. It's flawed, but not terrible, thanks primarily to Murray, Rick Moranis and that marshmallow man.

I know Ghostbusters is a beloved cultural touchstone for a lot of people, but I think there were far better and more self-assured silly comedies made in the 1980s -- Pee Wee's Big Adventure, Beetlejuice and Airplane! come immediately to mind.