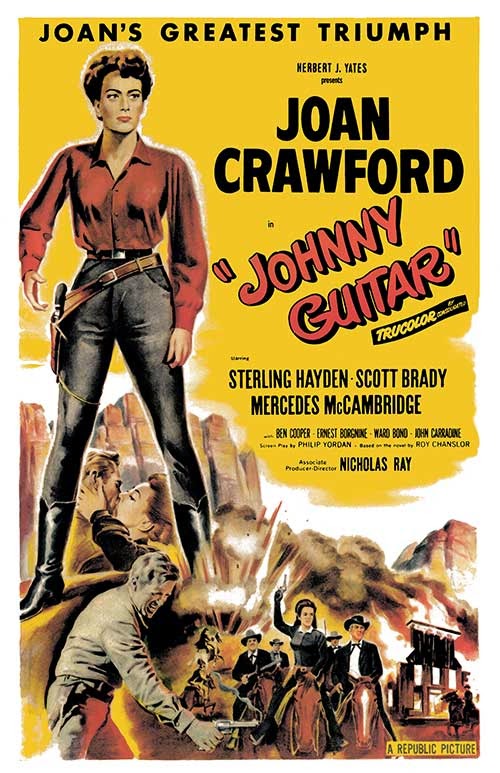 
What the Queer Cinephile Says: Western films have been around since the silent era. They were always popular, but big producers regarded them as low-budget pulp for smaller studios and B actors. All that changed in 1939 when a handful of high-profile westerns (Dodge City, Destry Rides Again, Stagecoach) with some breakout stars (Errol Flynn, James Stewart, John Wayne) made a lot money and earned critical praise. Author and screenwriter Frank Gruber (1904-1969) once argued that there are only seven basic western plots: something involving the Union Pacific railroad; something about building a ranch from nothing; something about the ranch being threatened by rustlers or competing landowners; something about revenge; something about the cavalry and the Indians; something about an outlaw; something about a lawman. The only things missing from Johnny Guitar are the cavalry and the Indians. Just change the ranch to a saloon and recast the cattle baron and saloonkeeper as women -- Mercedes McCambridge and Joan Crawford, respectively.

With a little research I learned that Joan Crawford bought the rights to an obscure novel and brought it to Republic Pictures, suggesting it as a project for her and director Nicholas Ray. Republic assigned the screenplay to Ben Maddow, but since he'd been dubbed a Communist by Congress's House Committee on Un-American Activities, the studio slapped another writer's name on the script. Meanwhile, Crawford demanded changes that favored her character, Vienna, because she owned the book rights and she's Joan Fucking Crawford.

Audiences were expecting a western version of the typical Crawford vehicle. What they got was a baroque, highly-stylized melodrama filmed in something called Trucolor, a process best described as Technicolor's crude little brother. Yes, it looks like a western for about the first five minutes. Our titular character -- played with stiff, stoic ease by Sterling Hayden -- is on horseback, riding through a section of Arizona's mountainous terrain where railroad workers are dynamiting the hell out of things to make way for tracks. Johnny Guitar surreptitiously witnesses a stagecoach robbery, then rides on to his destination, Vienna's saloon and gambling hall. Enter Crawford's Vienna, who sent for the guitar player to be her establishment's entertainment. One male employee sums her up for us: "Never seen a woman who was more a man. She thinks like one, acts like one. And sometimes makes me feel like I'm not." That's followed by an extended, somewhat stagey, semi-surreal but remarkably sustained first act scene that introduces every main character and establishes the nasty rivalry between Vienna and the local cattle baron, Emma Small (Mercedes McCambridge).

Mr. Guitar muses, "When you boil it all down, what does a man really need? Just a smoke and a cup of coffee." Then all hell breaks loose: fistfights, gunslinging, a bank holdup, horseback chases, more dynamite, an impressive fire and a lynching party. Sounds like a western, right? The cliches and conventions are all there, but everything about this movie is emphatically askew -- Crawford's costumes bounce back and forth between masculinized western wear and girly clothes; the revered Vienna and feared Emma literally appear to be the only two women in the whole town; half the cast is acting in a proper western and the other half is chewing through the sensational Arizona scenery with abandon.

Which brings us to Joan Crawford and Mercedes McCambridge. Before Johnny Guitar, Crawford had already made over 80 movies. McCambridge had made a handful of films and won the Best Supporting Actress Oscar for 1949's All the King's Men. Crawford wanted Bette Davis, Barbara Stanwyck or Claire Trevor -- all too expensive or unavailable. Director Nicholas Ray settled on McCambridge. Credible sources (including McCambridge herself) swear that both women were battling alcoholism and developed a deep animosity for each other during the production. I don't know what these performances would look like if they weren't tinged with booze and acrimony. All I know is this: It's damn near impossible to upstage Joan Crawford, but McCambridge does it with a performance that's pitched between fermented belligerence and unrestrained mania. McCambridge did a lot of episodic TV roles after Johnny Guitar, but her later career is eclipsed by one shockingly good performance delivered off screen: she's the demonic voice emanating from a possessed teenage girl in 1973's The Exorcist.

Stray Gay Observations: I'm going to tell you why I almost never enjoy westerns: Because I feel sorry for the horses. They're always having to ride past scary fires and explosions, or carry people across rivers. Invariably, somebody slaps one of them with a strap and yells, "Faster!" So, you can distract me with the hot cowboys, but I'm probably never going to stop thinking that their horses are doleful about the whole Wild West lifestyle.

And then there's this dress. Perfect for any occasion -- a piano recital, a lynching...


Should You See It? Oh, come on. You have to see this! It has characters named Vienna, Johnny Guitar, The Dancin' Kid and Turkey. It's like a goofy fever dream. I was utterly fascinated and regularly gobsmacked by Johnny Guitar. It's not "Joan's Greatest Triumph," despite the movie poster's hyperbolical header. By this phase of her career, the triumphs were behind her -- Grand Hotel (1932), The Women (1939), Mildred Pierce (1945) and Possessed (1947). And some of the reviews were blunt and harsh. New York Times critic Bosley Crowther dismissed it as a fiasco, concluding that Crawford "is as sexless as the lions on the public library steps and as sharp and romantically forbidding as a package of unwrapped razor blades." Ouch.

Opinions have certainly shifted since then. In 2008, the National Film Registry of the Library of Congress selected Johnny Guitar for preservation, deeming it "culturally, historically or aesthetically significant." In the 60 years since it's release, plenty of critics and filmmakers have reevaluated and praised the film. Roger Ebert cites it as "surely one of the most blatant psychosexual melodramas ever to disguise itself in that most commodious of genres, the western." In a DVD extra, Martin Scorsese extols: "Johnny Guitar is an example of a minor film growing to achieve the status of a classic. It's modern sensibility has induced a number of different readings from the feminist analysis of the film to the Freudian subtext in the perverse sexuality running through it." Well, I am certainly not going to argue with Martin Scorsese.