The Queer Cinephile(s) #3: Valley of the Dolls

Valley of the Dolls (released December 1967) 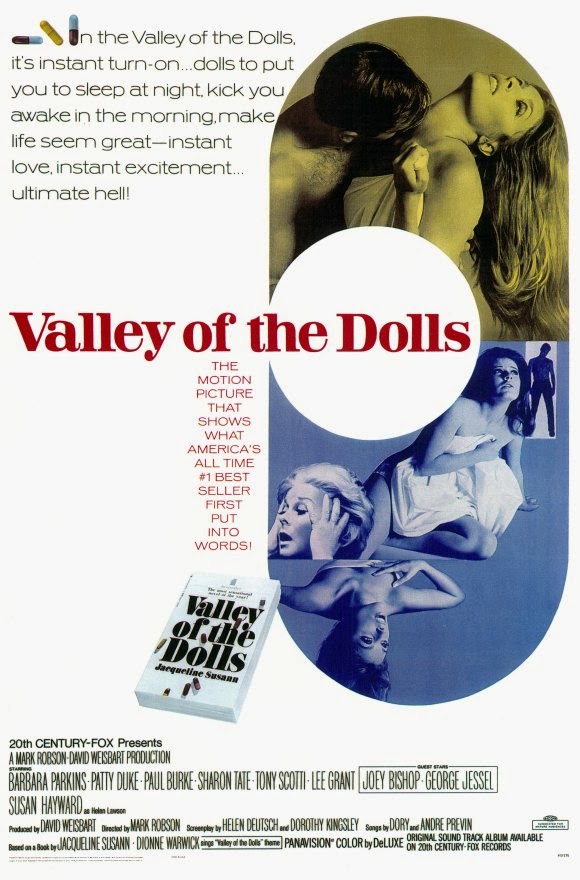 
What the Queer Cinephile Says: Arguably, 1967 was an extraordinary year in film, offering moviegoers a diverse slate of classics and beloved pictures like The Graduate, Bonnie and Clyde, The Dirty Dozen, To Sir, with Love, In the Heat of the Night, Cool Hand Luke, Guess Who's Coming to Dinner and Wait Until Dark. As a wee boy I heard stray references to Valley of the Dolls. Before I realized the neighborhood mothers were talking about Jacqueline Susann's infamous book and the subsequent movie, I believed there might be an actual valley filled with dolls somewhere. And since I grew up in Huntsville, Alabama, which is situated in the Tennessee Valley, I hoped it was only a short trip there by car. Nope. Dolls, as the trailer so portentously explains, are prescription pills. There are so many things wrong with this movie, let's just begin with the trailer itself. The narrator tells us what we need to know about our three young female stars: "Anne, good girl with the million dollar face and all the bad breaks... she took the green pills;" "Neely, who was such a nice kid and then someone put her name in lights and turned her into a lush... she took the red pills;" "Jennifer, international sex symbol, victimized by everyone... she took the blue pills." Spoiler alert! They all take the red pills, handfuls of them. There isn't a green or blue pill in the entire movie. Why, it's almost as if the guy narrating the trailer never even saw the picture. And that's a pity, because it's simultaneously terrible and terrific. Seriously, Hollywood can only accidentally make a movie this astonishingly bad and wildly entertaining about once a decade. (See also Exorcist II: The Heretic, Mommie Dearest or Showgirls.)

Now, about the ladies. Anne Welles (Barbara Parkins) -- the one with the million dollar face and all the bad breaks -- arrives in New York City on a snowy winter day, has one interview, gets a secretary job at a theatrical agency, and is discovered by a cosmetics mogul midway through some dictation. That leads to one of the bad breaks we were told about... a supermodel career. She also has the misfortune to fall in love with an attorney named Lyon. Because in this movie, the men all have names like Lyon Burke or Ted Casablanca or Tony Polar. Neely O'Hara (Patty Duke) -- the nice girl -- is fired from her first Broadway role after the show's aging star, Helen Lawson (Susan Hayward), determines that she's a threat. After that, Neely sings on a cystic fibrosis telethon... which somehow manages to propel her to musical superstardom as if she'd won American Idol. She even receives a Grammy award, not for a specific song in any particular category, but for her "warm contribution to the recording industry." Neely eventually ends up in Hollywood, living with fashion designer Tony Casablanca, whom everyone gets to call a queer, a faggot or a latent homosexual at some point. Finally, Jennifer North (Sharon Tate) -- the international sex symbol, victimized by everyone -- falls in love with and marries nightclub singer Tony Polar... whose rare hereditary disease pops up inconveniently and indirectly forces Jennifer into a career in French "art" films, otherwise known as soft-core pornography with subtitles.

Here are some random examples of what makes this movie so bad it's good...

Anne, Neely and Jennifer are all supposed to be friends, but the three of them never even share a scene together. There's not a single expository scene that might explain why they would even care about each other -- and that surprised me quite a bit since the book and the screenplay were written by women!

The musical numbers -- and there are no fewer than five of them for some reason -- are memorable not for the songs, but for the awkward staging. When Patty Duke belts out that tune on the cystic fibrosis telethon, her necklaces are swinging all over the place because the choreography makes her look like she's frantically trying to stomp out a fire. Susan Hayward is inexplicably surrounded by a gigantic, multi-colored plastic mobile as she unconvincingly lip syncs a song about planting her own tree and watching it grow.

Apparently, people with addictions didn't go to rehab in the 1960s. They went to a "sanitarium." So that's where Neely ends up for the movie's most hilarious sequence. One minute she's restrained to a bed screaming, "I need a doll!" -- a line that absolutely no one, including Meryl Streep, could successfully deliver -- and within minutes she's at the sanitarium's social hour, asking the band (the band!) to accompany her on a tune that will eventually turn into a duet with Jennifer's husband, Tony Polar, who's living in the same sanitarium... because in this movie people with addictions and people with debilitating hereditary medical conditions would certainly be treated at the very same institution.

Speaking of Tony Polar, when his sister sees him lusting for Jennifer early in the film, she says the kind of thing any sister who's been hiding your rare hereditary condition from you your entire life would say: "At night, all cats are gray." That's some wisdom, right there.

Patty Duke (The Miracle Worker) and Susan Hayward (I Want to Live!) both had Oscars when they made this film. It's almost like the director said to himself, "Well, they have Oscars, so I should just let them act." Hayward, 30 years older than Duke at the time, stepped into the role of Helen Lawson at the last minute when Judy Garland was fired. She's so bad, it's almost breathtaking. Perhaps the lack of preparation time combined with tone deaf writing and direction undermined her performance. I can't imagine Judy Garland making this work either; it's a one-note, unsympathetic role. But Patty Duke, all of 20 when she made this movie, chews the scenery like some kind of hybrid woodpecker-termite freak of nature. Somewhere around the hour and a half mark, she barges into Anne and Lyon's California beach house, tosses off a number of insults and heads to the liquor cabinet for a doll chaser. In the film's one singular moment of incontestable authenticity, long-suffering Anne tells it like it is: "Neely, you're being obnoxious." It might just be the greatest understatement in cinema history (and there were 30 more minutes of crying, screaming, boozing, pill-popping and wig-snatching to go for Neely).

And about those dolls. Pill bottles show up everywhere, magically. None of these characters ever see a doctor or visit a pharmacy to fill a prescription. The same generic-looking red pills they take in New York are just as freely and wondrously available when everyone relocates to California.

One last thing: Sharon Tate. Poor Sharon Tate. If you don't know what happened to her, Google it. Heartbreaking.

Stray Gay Observations: Many of the hairstyles are works of art. At times I was so mesmerized by the hair, I had to back up the disc to catch the dialogue. The costumes were designed by someone named Travilla, a multiple Oscar nominee (but not for this movie). If you've ever wondered what inspires a young gay boy in Ohio to put on a wig and a dress and steal his mother's makeup, this movie is your answer. It's like a tutorial for drag queens.

Valley of the Dolls does something interesting for its time: it acknowledges the existence of gay men over and over again, a revolutionary thing in 1967. One male character snorts, "Only in Hollywood do women faint because some queer deigns to design their clothes." Another remarks, "You know how bitchy fags can be." You can't even be offended by a line like that because the screenwriters have apparently forgotten that their movie contains the Helen Lawson and Neely O'Hara characters, two unadulterated bitches. In fact, the movie fails to present us with even one bitchy fag. Late in the film, Neely stumbles around San Francisco and still doesn't run into a single bitchy fag.

Oh, and if I died and had the opportunity to return to Earth as a woman, I'd be Barbara Parkins. At the very least, I'd want to have her voice. The way she pronounces obnoxious is so civilized.

The Lust Factor: I wasn't particularly attracted to any of the men in this film. Your results may vary.

Before They Were Famous: Toward the end of the film, Richard Dreyfuss (Jaws, Close Encounters of the Third Kind, The Goodbye Girl) turns up briefly as a theater stagehand. Unfortunately, he doesn't do or say anything memorable at all. He's just really cute.

Should You See It? Immediately. With friends of any gender or sexual orientation. Scandalous, critically reviled and hugely successful in 1967, it's a renowned camp classic today. For anyone who doesn't know what camp is, here's a simple explanation. Camp is what happens when a bunch of creative people come together to make a serious drama, but something goes monumentally awry in the process and they unintentionally make a comedy... and they don't know it until the audience starts laughing in all the wrong places.