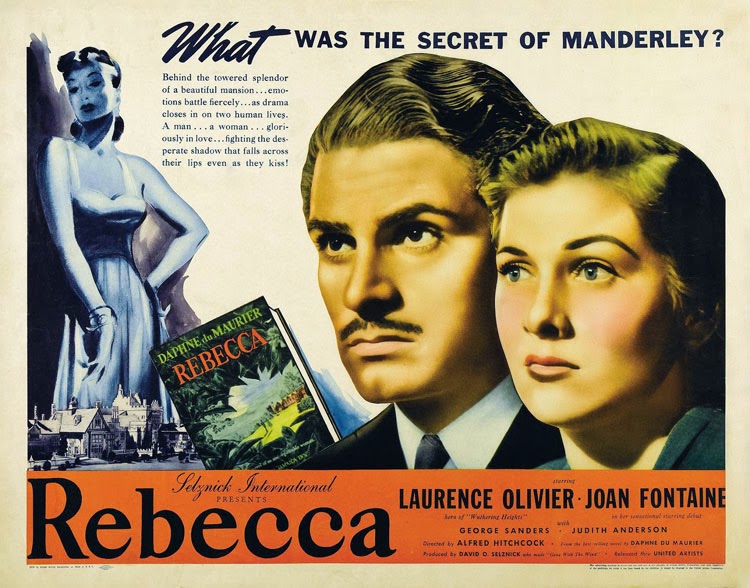 And here's the trailer that was created after it won the Academy Award for Best Picture and was re-released to theaters...


What the Queer Cinephile Says: In 1939, legendary producer David O. Selznick (Gone With the Wind) brought English director Alfred Hitchcock to the U.S. and handed him his first American movie project, Rebecca. The film, based on a best-selling novel by Daphne du Maurier, is about a wealthy man, Maxim de Winter, who lost his first wife, Rebecca, in a boating accident. Vacationing in Monte Carlo, he meets a self-effacing young woman who makes her living as the paid companion to an obnoxious rich widow. There's a whirlwind romance, a quick wedding and then the second Mrs. de Winter is whisked off to Manderley, an insanely gargantuan and foreboding seaside estate (we're talking east and west wings) to live happily ever after. The staff is welcoming, with the exception of a creepy and formidable head housekeeper named Mrs. Danvers. Laurence Olivier plays Maxim, a brooding man with a funny mustache and a big secret. Joan Fontaine is the second Mrs. de Winter -- her character's name is never revealed otherwise -- a new bride who quickly discovers that Manderley is run by the menacing Mrs. Danvers and seething with pervasive memories of Rebecca.

I loved a lot of things about this movie right from the opening credits: "Selznick International presents its picturization of Daphne du Maurier's celebrated novel." Yeah, picturization. My spell check assures me that's not a word. The casting of Joan Fontaine is terrific, and while Judith Anderson steals the picturization with her performance as Mrs. Danvers, George Sanders comes pretty close to snatching it away from her himself in his role as "Rebecca's favorite cousin." I also like the screenwriters' decision not to ever show us the title character -- Rebecca is revealed through details shared by the movie's other characters as opposed to a bunch of flashback trickery. Thus, she remains enigmatic.

Nominated for eleven Academy awards, Rebecca won Best Picture (there were ten nominees at the time), and for it's wonderful black-and-white cinematography, which featured some early film noir touches. It also marked the first of five Best Director nominations for Alfred Hitchcock; shockingly, he never won. See this, then watch Psycho, a film he made twenty years later. I'm not sure there's ever been a director who poked around in the moral darkness of humanity quite like Hitchcock.

Stray Gay Observations: I counted three different instances in which one of the characters referred to someone else's behavior as "queer." It was never used in a disparaging way, just as a rather ordinary adjective suitable for everyday conversation. The film reminded me of the first time I was ever called queer -- as a 9-year-old fourth grader -- and how I knew it wasn't a compliment, but I rather liked the sound of it anyway. I know plenty of gay men around my age who loathe the word, but I've grown very fond of it over the years and I'm pleased to see it frequently (and affectionately) embraced by younger people.

I'm not sure straight men ever notice things like this, but I enjoyed the subtle way Fontaine's clothes gradually shifted from dowdy to assertively sophisticated as her character lost its innocence, becoming more enlightened and mature.

Okay, let's talk about Manderley's sinister housekeeper, Mrs. Danvers. It won't take modern audiences long to understand that she was in love with the deceased Rebecca. What's unfathomable today is how audiences in 1940 and the people behind the motion picture industry's restrictive production code didn't get it, missing the romantic/sexual overtones and apparently interpreting her behavior as simply some kind of obsessive devotion to the first Mrs. de Winter. Mrs. Danvers has no backstory (also no husband); she exists to preserve the memory of Rebecca at Manderley. Australian-born stage actress Judith Anderson is unforgettable in the part -- only her second Hollywood film. The sequence where she gives the second Mrs. de Winter a tour of Rebecca's opulent bedroom -- complete with drawers full of underwear sewn by nuns! -- is riveting (and now one of my favorite film scenes of all time).

The Lust Factor: It is my understanding that Laurence Olivier was considered handsome and dashing around the time this film was made. I wish my mother was alive to confirm that for me. Unfortunately, none of the actors in this film caused a stirring in my groin.

Before They Were Famous: English character actor Leo G. Carroll has a small role here, as he did in a half dozen Hitchcock films. In the 1960s he became famous on TV as the man who bossed around the title characters of The Man from U.N.C.L.E and The Girl from U.N.C.L.E.

Should You See It? Absolutely. It's a smashingly good gothic mystery richly deserving of its status as a classic.