The Queer Cinephile(s) #10: Bringing Up Baby 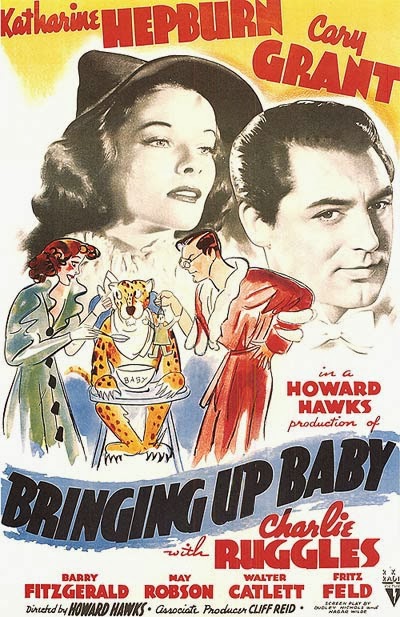 
What the Queer Cinephile Says: Bringing Up Baby is what is known as a screwball comedy -- a genre of American film that originated in the early 1930s and was very popular during the bleak economic times of The Great Depression. But the word screwball came from the world of baseball. New York Giants pitcher Carl Hubbell became famous for striking out batters with a pitch dubbed "the screwball." My understanding of this is that, depending on the pitcher's arm angle, the ball can flutter and drop, go in different directions and generally behave in unexpected ways. That describes the characteristics of good screwball comedy, too. A lot of film historians would probably call 1934's It Happened One Night the first true screwball comedy -- and that also happens to be the same year Carl Hubbell made baseball history when he struck out five men in succession with his screwball pitch during an All-Star Game.

According to my research, Bringing Up Baby was a troubled production and not a financially successful film in its day. The part of Susan Vance, described as a "flutter-brained vixen" in the trailer, was tailored for Katharine Hepburn, who'd made a dozen films and already won an Oscar (1933's Morning Glory), but had never made a comedy. The part of David Huxley, an earnest paleontologist who just needs one last bone to finish assembling a brontosaurus skeleton, was offered to Cary Grant only after a half dozen other actors were considered. Hepburn was insecure about her comedic skills and Grant wasn't sure how to make an intellectual character funny. The script was rewritten multiple times; at one point gag writers were brought in to punch up the dialogue and add a subplot.

Here's all you really need to know: It's the day before David's marriage to chilly fiance Alice, who acts more like a personal assistant than a bride-to-be, and says things like, "This will be our child!" while gesturing to David's dinosaur skeleton. To continue his work at the museum, David needs to schmooze a potential donor and wangle a million dollars. There's a meeting on a golf course that goes awry when heiress Susan Vance hijacks the game. Of course, Susan also happens to be the donor's niece -- and she would love to inherit that million dollars. Meanwhile, Susan's brother has sent her a leopard from Brazil because that makes sense in this family -- and it's name is Baby. Deciding the leopard needs to be at her family's Connecticut farm, she tricks David into accompanying her on a road trip home. Complications arise thanks to a haughty aunt, a drunken gardener, a bumbling constable, the circus that just happens to be in town, and a rude little dog.

The set up of a screwball comedy is always pretty preposterous. Two things make them work: A cast that can sell the crazy and a director that keeps it all moving along so briskly that you forgive the plot holes and accept the coincidences. Howard Hawks, one of Hollywood's best-ever directors (Sergeant York, The Big Sleep, Gentlemen Prefer Blondes) was in charge here. He gallops past some of the script's clunkier transitions and sustains the pace. Bringing Up Baby also benefits from the considerable charms of Cary Grant and Katharine Hepburn. When an exasperated David refers to Susan as a "conceited, spoiled little scatterbrain," he's absolutely right. But you have to give Hepburn credit for a performance that generates opportunities for us to like her anyway.

Imagine George Clooney and Mad Men's Jon Hamm rolled into one person and you get the impossibly good-looking Cary Grant (1904-1986), an extremely versatile actor who made over 75 films -- comedic and dramatic, even teaming with Alfred Hitchcock four times. Despite critical praise, Bringing Up Baby failed to make a lot of money during its initial release, but no one blamed Grant or Hawks for that. Instead, Hepburn was labeled "box-office poison" by the president of the Independent Theatre Owners of America and her studio, RKO, allowed her to buy out her contract. Hepburn would ultimately make about 50 films and win four Academy Awards anyway; she skipped every Oscar ceremony. Cary Grant was awarded an honorary Oscar in 1970, "For his unique mastery of the art of screen acting with the respect and affection of his colleagues."

Stray Gay Observations: My friend Linda loves it when I mention the fashion. Bringing Up Baby's credits say Gowns by Howard Greer. Greer designed clothes for about two dozen movies, with emphasis on the gowns. Greer's gowns for Hepburn are at once sophisticated and whimsical. I don't know who decided to put Cary Grant in a pair of glasses to make him appear more intellectual, but it just makes him look like the sexiest museum nerd on Earth. And then there's this: 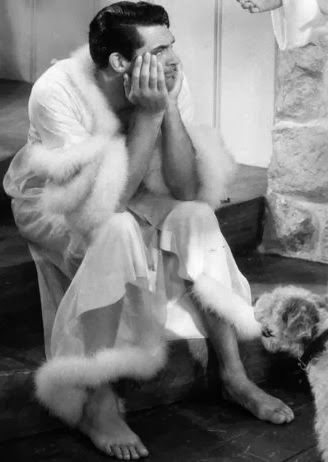 Cross-dressing is fairly common in screwball comedies. Here, Grant is forced to don Hepburn's ridiculous negligee. When Hepburn's high and mighty aunt demands an explanation, Grant's hapless character kicks up his heels and bellows, "Because I just went gay all of a sudden!" It's since been debated whether this is the first use of gay to imply homosexuality in a motion picture. At the time, gay was widely used as a simple synonym for happy. But according to the Dictionary of American Slang, gay men have been referring to themselves as gay since the 1920s. Who knows what mainstream audiences made of this declaration at the time. And according to multiple sources, the line wasn't even in the original script; Grant is believed to have ad-libbed it. As Bringing Up Baby became a wildly popular fixture on TV in the 1950s and '60s, everybody was exposed to the sight of an ostensibly heterosexual man in a negligee declaring that he'd suddenly gone gay. Cary Grant was married five times and gay rumors advanced about him during the latter part of his life. His sexual orientation has been written about extensively since his death in 1986.

Should You See It? In 1990, Bringing Up Baby was selected for preservation in the National Film Registry of the Library of Congress. That's where they keep copies of all the "culturally, historically or aesthetically significant" movies in the U.S. The American Film Institute has placed it on their lists of both the greatest and funniest films of all time. So, there's that. To be honest, it took nearly a half hour for me to go from being mildly amused to chuckling pretty consistently. A second viewing only heightened my appreciation of the film. This is what a top comedy looked like in the 1930s; it's doesn't contain the raunchy humor of The Hangover, nor does it look like any Adam Sandler comedy that's ever been made. But if you're a fan of something like Sandra Bullock's The Proposal, this should be pretty satisfying.