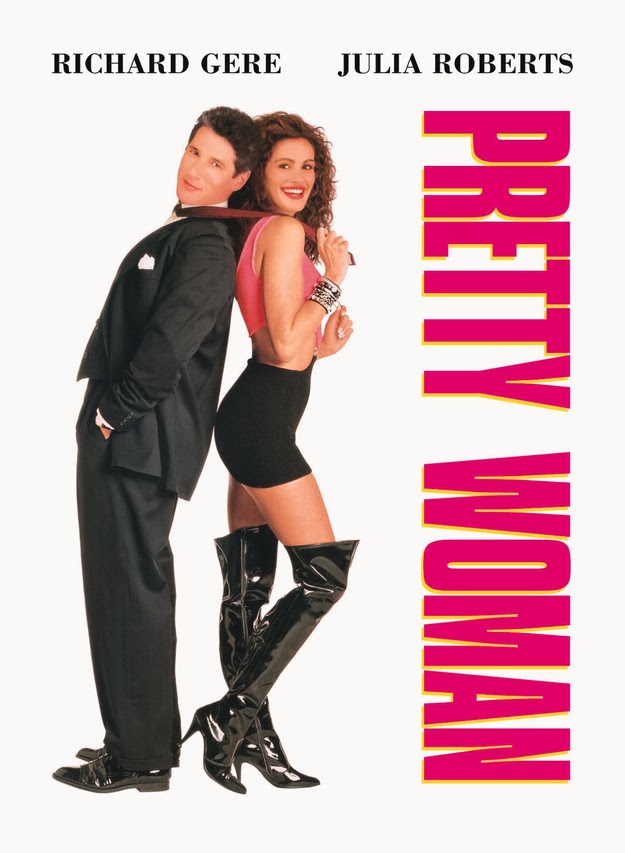 I'm willing to believe some high-end prostitution services around the country employ women as attractive and engaging as Julia Roberts. But I've lived in Midtown Atlanta for decades and I've seen my share of women working the streets. They're usually scrawny. Their skin doesn't look healthy. Their hair doesn't look like it was done by a salon professional. Their clothes do not appear to have been selected especially for them by a celebrity stylist. In short, they never, ever look like Julia Roberts. About 22 when she made this movie, Roberts is all radiance, megawatt smile and superhuman hair. Seriously, it would take about five more years before Jennifer Aniston's hair finally upstaged Roberts' tresses in the mid '90s.

Okay, the plot and stuff. Richard Gere is Edward, a very wealthy New York venture capitalist who's in Los Angeles to negotiate the purchase of a flailing company. Essentially, he's the not-Mormon Mitt Romney. After his girlfriend breaks up with him on the phone, he impetuously hops into his attorney's car and drives off in search of his Beverly Hills hotel. Lost in Hollywood, he asks for directions from a hooker named Vivian (Roberts). After some banter, Vivian gets behind the wheel and drives him there herself. Smitten, lonely, horny or something, Edward purchases her services for the night and there's an awkward scene of suggested sex while an I Love Lucy rerun plays on the TV. The following morning, Edward offers Vivian $3000 for a week's worth of companionship. To make her more presentable at business dinners and the opera, she gets a makeover montage scored with Roy Orbison's "Pretty Woman." They have one more awkward sex scene, bicker occasionally and fall in love. Vivian doesn't want to be treated like a hooker anymore. Roberts looks fantastic through it all.

I suspected the movie was written by a man -- yep, J.F. Lawton. It's hard for me to believe a woman could have written a character like Vivian. He gives her a backstory that sounds patently false the second Roberts delivers the lines. Vivian is just a sweet Georgia girl who followed a guy to Hollywood, got immediately dumped, worked some unfulfilling low-wage jobs and turned to prostitution because she was too ashamed to return home and tell her family her big move west was a failure. Seriously. So she'd rather be a prostitute than go home and say, "I made a mistake; I fucked up my life over a guy." And here's the thing: In every scene that involves Vivian walking down a street or through a hotel lobby, everyone watches her. Everyone. The movie consistently affirms that she's got good looks and presence; she's special. But her only alternative was working the streets? Really? No modeling jobs, no open casting calls? Can't be a movie or TV extra? A restaurant hostess? I mean, Vivian looks like Julia Roberts, folks.

Pretty Woman was also directed by a man -- Garry Marshall. If Garry Marshall sounds familiar to you, it's because he's the man behind a lot of popular sitcoms -- The Odd Couple, Happy Days, Laverne and Shirley, Mork and Mindy. At times, the movie feels like a sitcom with just enough adult material to earn an R rating. In fact, I'm somewhat surprised no network ever tried to turn this into a series.

Stray Gay Observations: By the time Pretty Woman was made, Richard Gere had famously appeared naked or nearly naked many times: Looking for Mr. Goodbar (1977), Broadway's Bent (1979), American  Gigolo (1980), An Officer and a Gentlemen (1982), Breathless (1983). Curiously, for a film about hiring a prostitute to be your companion for an entire week, we barely even see his chest. With the exception of two bathtub scenes filled with bubbles (and seriously, who takes bubble baths except children or people in movies?) Roberts is never nude either. In fact, this film revels in showing us how good she looks in clothes -- whether it's her streetwalking attire or the glamorous Rodeo Drive wardrobe Edward buys her; it's like a fashion show. The film's R rating? It's purely for some coarse language and an implicit blowjob.

Before They Were Famous: There's Jason Alexander as Philip Stuckey, Edward's uptight and ruthless attorney. A couple of months after the film's release, American TV audiences would get to know him as George Costanza on Seinfeld. What few people probably know is that Alexander already had a successful stage career going before Pretty Woman or Seinfeld -- he'd won a Tony for Best Lead Actor in a Musical (Jerome Robbins' Broadway). And that's Laura San Giacomo as Vivian's fellow hooker and roommate, Kit De Luca. She'd made a bit of a splash in 1989's sex, lies and videotape, but this was her biggest film success before heading to television and sitcom glory co-starring with George Segal and David Spade in Just Shoot Me.

Should You See It? The best I can do is a qualified yes. If you want to see the vehicle that propelled Julia Roberts to stardom and began her reign as the most formidable female star of 1990s, go for it. She earned a freakin' Oscar nomination for this thing (side note: historically, the single most surefire way for an actress to get a nomination is to play a hooker). At the time of its release, plenty of mainstream critics gushed over Pretty Woman. Roger Ebert actually called it an "openhearted love fable." New York Times critic Janet Maslin claimed that it "manages to be giddy, lighthearted escapism much of the time." Gene Siskel, of the Chicago Tribune, acknowledged that Roberts' character was unrealistic, but deemed it "just a solid piece of commercial  filmmaking." I think Pretty Woman is a wholly improbable, dishonest, self-consciously cute rescue fantasy. That said, it's got panache, too. I have to reluctantly accept it as a beloved cultural touchstone that lots of people will vigorously defend. I don't get that, but I think it has something to do with the alluring blend of Roberts, the amount of conspicuous consumption on display and the predictable fairy tale trappings involved.