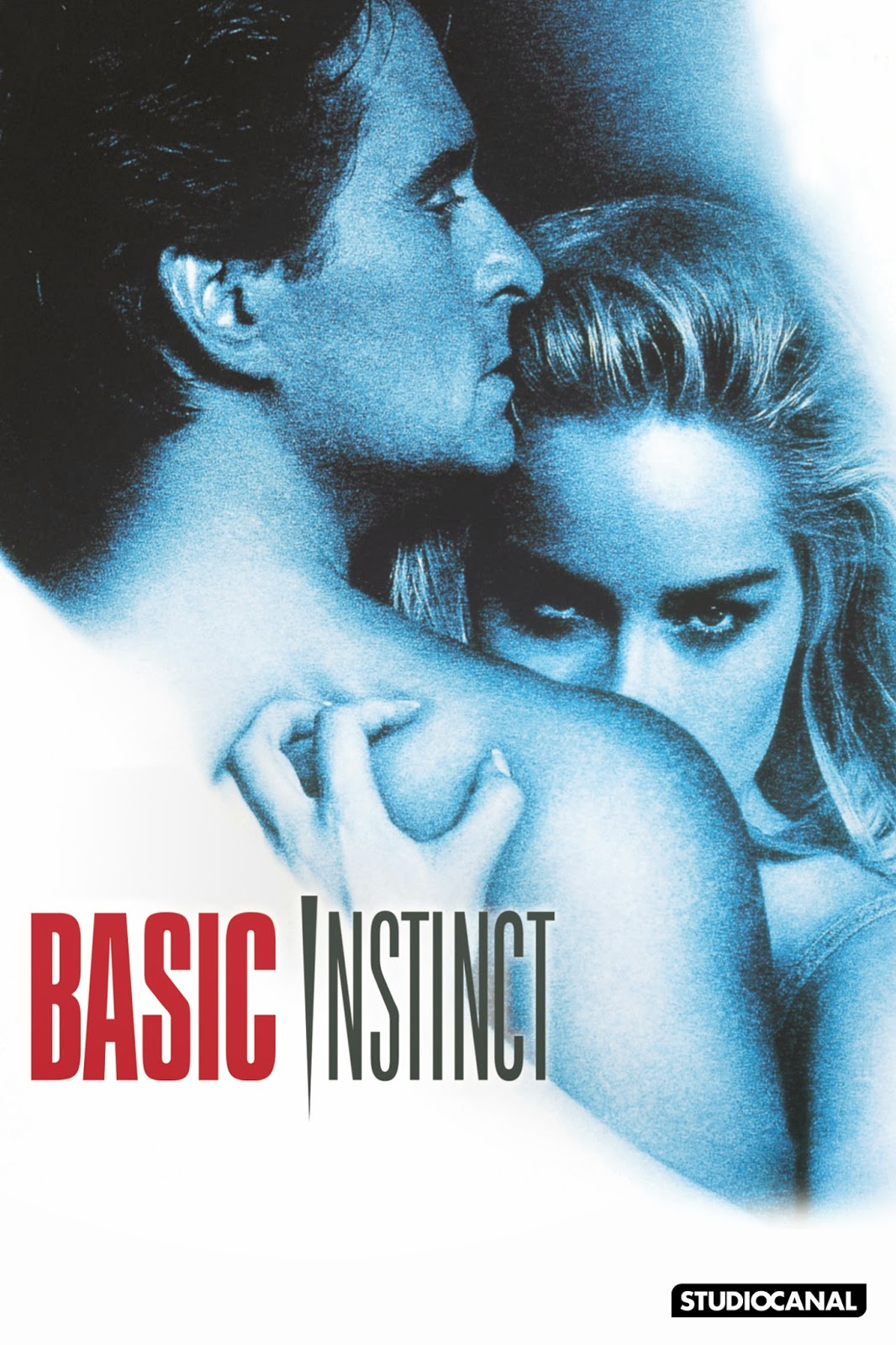 Basic Instinct begins with a man and a woman having sex. You can never really get a good look at the woman's face because her blonde hair is in the way. She ties his hands to the bed posts, then stabs him 31 times with an ice pick. I didn't personally count the stabs -- a police officer announces that fact in the next scene, along with lines like, "There's cum stains all over the sheets." and "He got off before he got off." Yeah, it's going to be that kind of movie. So, police detective Nick Curran (Michael Douglas) and his partner, Gus (George Dzundza), are assigned to the case. Their suspect? Well, the dead guy -- "a retired rock and roll singer" -- had a girlfriend, Catherine Tramell (Sharon Stone). Catherine is a filthy rich heiress and novelist who owns two amazing San Francisco area homes. She's not at House #1 -- it's just the maid and a woman named Roxy who will eventually be revealed as Catherine's lesbian lover. And because Curran and Gus have obviously never seen a single episode of Law and Order (and Michael Douglas can't remember that he played a cop on The Streets of San Francisco in the 1970s), they don't bother to do some obvious police work, like question the maid about her employer's comings and goings. Nope, they just head to House #2, a beachfront property that's even better than the first house, but has no maids or lesbians hanging around. Catherine assures Curran and Gus that she was not the dead guy's girlfriend: "I wasn't dating him. I was fucking him." Curran is immediately smitten, because in this movie, leaving the scene of perhaps the most gruesome murder you'll ever investigate and finding the person mostly likely to be the psychopathic perpetrator behind it is... arousing.

Before giving us more Catherine, the movie kills time having Curran meet with police psychologist Beth for a scene of clunky exposition to establish that, (1) he has problems with drugs, alcohol and smoking, (2) he's been ordered into counseling because he accidentally killed some tourists, and (3) he and Beth used to be lovers. In other words, Curran is a piece of work. And Beth has no ethical boundaries. Then, Curran meets with a professor who's an expert on the pathology of psychopathic behavior and finds out, (1) the killer has a "devious, diabolical mind," (2) Catherine wrote a book called Love Hurts that depicts the ice pick murder of a retired rock and roll star by his girlfriend, and (3) everybody pretty much thinks Catherine did it.

Catherine voluntarily agrees to questioning in a preposterous interrogation room that only exists in Hollywood movies. I mean, seriously, she's sitting in a chair that's elevated like a thrown, wearing a very short dress and no underwear, crossing and uncrossing her legs in full view of Curran and a half dozen police detectives and investigators. Catherine's vagina casts a magical spell on Curran and he spends the next hour and a half obsessed with the woman and being pretty much the worst police detective in the history of movies. Even the vulgar wisdom of buddy Gus can't break the spell: "She got that magna cum laude pussy on her that done fried up your brain." The rest of the film consists of two absurd car chases, a very rape-like sex scene, several more murders, some swell San Francisco exterior shots, lots of nonessential yelling, and a completely pointless cameo by Dorothy Malone (the woman won an Oscar in 1957 for Written on the Wind and she's given about five lines that do not advance the plot in any discernible way; I just felt sorry for her).

The script is by Joe Eszterhas (he also wrote 1983's wildly successful Flashdance and 1995's camp classic Showgirls). It feels like a first draft. It would be generous to call the ending ambiguous; it's really maddeningly incoherent. Director Paul Verhoeven (RoboCop, Total Recall, Starship Troopers) lets rip, but what this thing needs is a tighter rein. He appears to believe that allowing actors to shout their lines at regular intervals is all that's necessary to create tension or sustain momentum. About the acting... Michael Douglas isn't remotely convincing, but to be fair, I don't know how anyone could have made the alternately repellent and idiotic Curran character believable. And then there's Sharon Stone as Catherine Tramell, a role that literally made her a household name. I've seen her give solid performances in other films (The Muse, Casino). Watching this, I decided that one of two things was going on with her. Either she's deliberately mocking all those icy blonde Hitchcock femme fatales, in which case it's a brilliant turn, or she attempted to play the complex archetype in a traditional way and was undermined by a director who was mostly used to making science fiction movies. Whatever happened, you can't take your eyes off Stone -- she's beguiling.

For the record, I watched the unrated director's cut, so it probably contained more sex, stabbings and nudity. It also had two absorbing extra features. Several of the filmmakers confirm that they set out to make a modern Hitchcock movie and seem confident about having succeeded. They are delusional. Basic Instinct is a bad, bad movie. Unfortunately, it never transcends ordinary bad into so-bad-it's-good.

Stray Gay Observations: There was a lot of pre-release controversy about this movie back in 1992. The script was leaked to LGBT activists who vociferously objected to the fact that there are exactly three significant female roles in the movie -- Catherine, Roxy and Beth -- and the audience is led to believe each one of them is a homicidal lesbian or bisexual before the credits roll. First, activists disrupted location shooting, slowing down the production schedule, then publicly revealed whom they believed the killer to be just before the film's release. Both sides are presented in the DVD extras. For me, there's no denying that the movie links queer sexuality and violence. But the film is such a cartoon, filled with underdeveloped characters and lurid, faux-sexy nonsense, that it's impossible for me to take it seriously enough to be offended.

On a completely different note, Sharon Stone gets to wear some pretty terrific clothes -- a couple of her outfits (by Nino Cerruti and Ellen Mirojnick) even echo designs worn by Hitchcock blondes like Tippi Hedren and Kim Novak.

The Lust Factor: I may be gay, but even I know that Sharon Stone had a rockin' body circa 1992. Also, Michael Douglas' butt double earned his paycheck.

Before They Were Famous: Mitch Pileggi, who played Scully and Mulder's FBI boss on The X-Files (1993-2002), has a couple of scenes as an Internal Affairs Investigator, or something. His purpose in the film is never clear, but he does get to restrain Michael Douglas at one point.

Should You See It? If you just want to see what all the fuss was about back in 1992, sure. Otherwise, nope. You see, the thing about Basic Instinct is that, well, basically, it stinks. (See what I did there?)