The Queer Cinephile(s) #7: The Man Who Fell to Earth

The Man Who Fell to Earth (released March 1976) 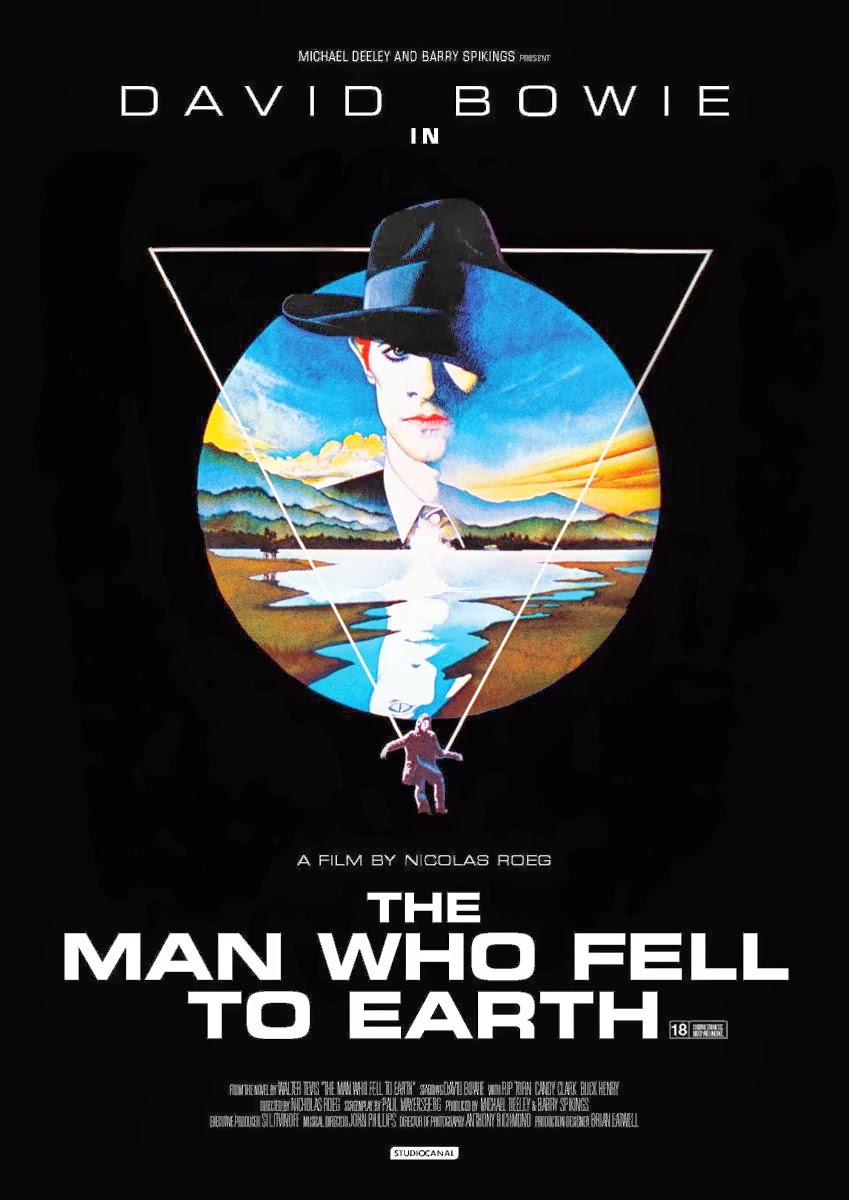 
What the Queer Cinephile Says: If you weren't alive in the 1970s to witness the ascension of art rocker David Bowie, there's probably no way I could adequately describe it you. Experimental, innovative, influential and enigmatic, Bowie successfully navigated multiple stylistic shifts while simultaneously playing with his public image, even creating an androgynous glam alter ego named Ziggy Stardust at one point. His sexuality was ambiguous -- and the subject of great debate. He appeared to be distinctly unlike any other famous person on the planet back then. So, it's not surprising that he was cast in a film about an extraterrestrial; there's something otherworldly about him.

Bowie plays the titular character in The Man Who Fell to Earth, a humanoid alien whose small spacecraft plummets into a New Mexico lake. He walks to the nearest town, a little place called Haneyville, and attempts to sell a ring to the proprietor of a jewelry store for cash. When asked for identification, he produces an old passport -- implying that this might not be his first visit to Earth. After a time jump, it's abruptly revealed that our visitor has turned himself into a businessman named Thomas Jerome Newton. Armed with plans for a series of advanced technologies, he approaches an attorney named Oliver Farnsworth (Buck Henry) for assistance in attaining patents that will make hundreds of millions of dollars. Before you know it, he's the head of a conglomerate called World Enterprises. Newton has a mission on Earth, but it's slowly revealed and details are mostly left to the audience's imagination. It's never explicitly stated, but his plan appears to have something to do with saving his home planet from a catastrophic drought. (I'm told that this is all spelled out in the 1963 book upon which the film is based.)

Succumbing to the need for companionship, Newton gets involved with a hotel maid, Mary Lou (Candy Clark), a simple but sweet creature who can't navigate the complexities of life without gin. They end up living together in a house he has built near the site of his initial landing in New Mexico. Simultaneously, his search for a scientific advisor that can put him back into space leads to an alliance with Dr. Nathan Bryce, (Rip Torn). Newton's trust in Bryce has disastrous results. And the disclosure of his true identity to Mary Lou leads to one of the film's most outstanding sequences, including an impressive freak out by Candy Clark.

Believe me, I've made this sound quite a bit more straightforward than it is. Screenwriter Paul Mayersburg and acclaimed British director Nicholas Roeg have deliberately made a fractured, wonky and often disorienting film. The narrative structure, with it's time jumps and elliptical editing, forces the viewer to fill in a lot of blanks and connect various storytelling dots. Watching it, I was reminded of Stanley Kubrick's 2001: A Space Odyssey (1968), another film that I'd describe as unapologetically incoherent and a little frustrating. But The Man Who Fell to Earth has David Bowie. In his debut film, he makes a damn convincing alien. So much so that when he calmly states, "I come from England," it's one of the most sublimely wry moments I've ever seen captured on film.

From the research I did after watching this, a lot has been written about Bowie's performance in the 38 years since the film's release. Some reviewers weren't sure Bowie was acting at all, others have wondered how much impact his well-documented 10 grams a day cocaine habit had on his characterization at the time. Very recently, Malcolm Jones of The Daily Beast declared, "With him as their star, they were halfway to weird before they got out of bed." Well, weird will only take you so far; Bowie is genuinely mesmerizing. Newton is diverted by the earthly pleasures of sex, television and gin -- a beverage he has a hard time distinguishing from water -- but the character's arc is compelling and Bowie is restrained and credible no matter how trippy the movie turns.

Stray Gay Observations: There's a moment in the film where it becomes obvious that two characters are incidentally gay. There's nothing stigmatizing or patronizing about the revelation -- and that's fucking remarkable for a film made in 1976. But then this was a British production; American films of 1970s were still portraying us almost exclusively as creepy deviants (Vanishing Point, 1971), murderous cross-dressers (Freebie and the Bean, 1974) or self-loathing and suicidal aberrations (Ode to Billy Joe, 1976).

The Lust Factor: There's quite a bit of uninhibited full-frontal nudity in this picture. Bowie, Candy Clark and Rip Torn are all naked in well-lit rooms without body doubles or strategically placed sheets.

Should You See It? There's much to admire about The Man Who Fell to Earth, but it's going to be slow going for people who were raised on Star Wars, and it has nothing in common with an alien invasion movie like Independence Day. It's ambitious, contemplative and occasionally surreal. I can say, without reservation, that a movie like this would never get made today. My advice? See it with someone else; you're going to want to talk about it afterwards.