Queerlicue* noun, kwir~li~kyoo
1. like a curlicue, but with a queer flourish
2. something amusingly odd, strikingly unconventional or accidentally fabulous

... and memorable, quirky videos -- like this one for "Witch Doctor." It appears to be inspired by the whirling/spinning dance meditation of Sufism, the mystical Islamic belief system. And it's rather amazing. (I will not, however, attempt to make sense of the lyrics.)


Well-Strung. This NYC-based string quartet has considerable fun fusing classical and pop music.
They've fiddled around with everything from Kelly Clarkson to Frozen's "Let It Go," but surely no one was expecting them to reach all the way back to 1979 for "The Devil Went Down to Georgia" -- a country crossover hit recorded by The Charlie Daniels Band. Since it's release, Mr. Daniels has become more infamous for his racist and homophobic rants than his music, so it's a kick to see an all-gay band make a mashup of his song and Bach's "Double Violin Concerto."


You can find Well-Strung's music on iTunes, Amazon and CD Baby.

Great music would be enough, but these guys also enjoy making amusingly arty, over-the-top videos that feature plus-sized Max in all his uninhibited glory. And makeup. And costumes. Example: "Make Me Dance." What the guys had to say about it: "For this new video we wanted to add disturbing and obsessive elements to a hyper-candy-pop imaginary world, in order to create an acid hallucination, halfway between Mark Ryden's paintings and Alejandro Jodorowsky's celluloid visions, so that the hysterical mood of the track could be emphasized as much as possible."

Most of Hard Ton's music is available on iTunes. The rest of their videos are on their YouTube channel, here. And I'll just let Max have the final word: 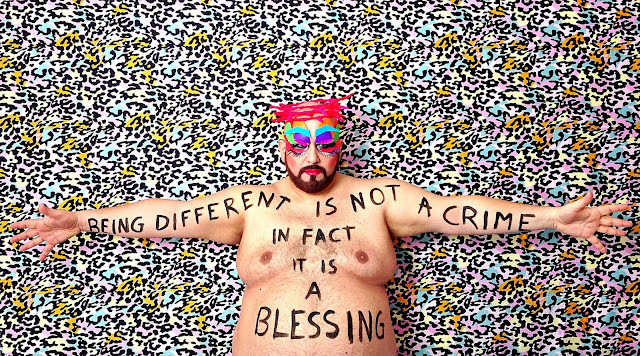