Teletubbies Meet Die Antwoord. Las Vegas-based video editor Robert Jones makes mashup videos that are inventive and occasionally demented. He's taken the Teletubbies -- beloved by toddlers everywhere -- and put them together with South African rap-ravers Die Antwoord, a duo that's known for it's vaguely creepy lyrics and (sometimes deeply) unsettling videos. There's something admirably off and compelling about them.
Now watch how Jones edits the Teletubbies to make it appear as if they're responsible for "I Fink U Freeky," Die Antwoord's 2012 hit. It's an insanely good match.


If you want to see Die Antwoord's original video for "I Fink U Freeky," go here. It's super-stylized and super creepy. Like rats and snakes and scary teeth creepy. And not safe for work. I warned you. Or you can check out the rest of Robert Jones' video mashups on his YouTube channel.


Levonia Jenkins. That's the drag persona created by Greg Scarnici, a NYC-based comedic artist, musician and author (I Hope My Mother Doesn't Read This). This is Greg...

And this is Levonia Jenkins... 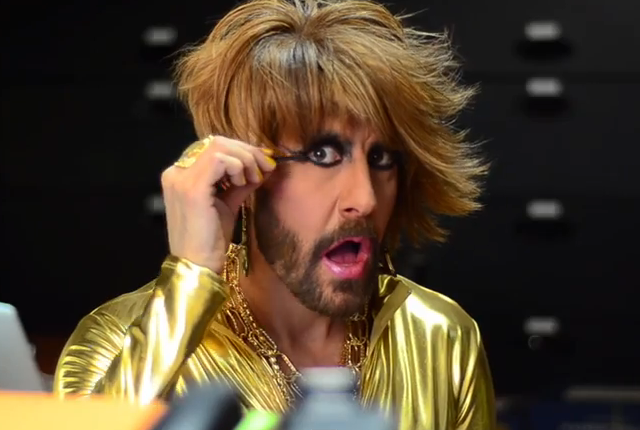 There's more from Greg (and Levonia) on his YouTube channel.


DaddyB. This Madrid-based fella describes himself as a "big, hairy, out, gay bear dance and pop artist."

His first single simultaneously educates anyone unfamiliar with the gay bear subculture and functions as a personal ad. DaddyB proudly proclaims, "I want a bear," to a retro '90s house beat. And mercifully, he has a sense of humor about his desire, because a straightforward take on this subject could have been deadly. Director Alvaro Pastor brings the right amount of whimsical exaggeration to the video, which also features irresistibly goofy choreography by DaddyB -- who's flanked by a pair of sexy bearded cubs. Warning: There's some explicit language and provocative devouring of Cornish game hens.