I'm a cinephile. Studied film in college and got to review movies for a TV station once (don't get excited; it was way back in the 20th century). My Netflix queue swelled to over 400 titles in 2013, so, for 2014, I gave myself an assignment: watch 50 films that I've never seen before and write something about them. I'll be watching a little bit of everything -- Oscar bait, indie darlings, black & white classics, cult flicks, blockbusters and weird shit my friends have been recommending for years.


What the Queer Cinephile Says: The state of Minnesota -- "Land of 10,000 Lakes" -- is not usually recognized for its cultural contributions. It's well known for its natural beauty and cold winters, but the twin cities of Minneapolis and St. Paul have a thriving theatre community and music scene, too. Minnesota has given us the Andrews Sisters (best-selling swing/boogie woogie group of the 1940s), Judy Garland (yup, The Wizard of Oz), Bob Dylan, Husker Du, The Replacements, wrestler-turned-governor Jesse Ventura, two-time Oscar winner Jessica Lange (American Horror Story, among other things) and humorist Garrison Keillor (Praire Home Companion). And then there's Prince Rogers Nelson, known to the world by the mononym Prince.

Purple Rain is a purportedly semi-autobiographical film about how Prince became Prince. The script was concocted by award-winning student filmmaker Albert Magnoli and TV writer William Blinn, whose credits included everything from Gunsmoke and Starsky and Hutch to Eight is Enough and Fame. Magnoli (who also directed) and Blinn skip over Prince's childhood entirely. There's no look-alike child actor banging away at piano lessons, plucking a guitar or bustin' moves in the street. It's not that kind of biopic. Curiously, no one ever calls him Prince, even once, despite the fact that he looks and dresses exactly like Prince. He's "The Kid." There's not a single scene where The Kid pauses to consider a style choice, like that wispy mustache or asymmetrical hair, the ruffled shirts and tight pants or even those lacy gloves. Nope. The Kid is Prince, a fully developed, magnetically androgynous enigma from scene one. And even though Prince's musical breakthrough happened in the late '70s, everything in Purple Rain takes place over the course of a few weeks in what looks exactly like 1984. The fashions, makeup and hairstyles distinctly capture that unmistakable aesthetic of the 1980s.

Shot mostly in and around Prince's hometown of Minneapolis, Purple Rain features numerous performances at the famous First Avenue and 7th St Entry nightclub. And that's where the film begins, with The Kid and his band, The Revolution, performing "Let's Go Crazy" for a packed house. Cross cut with their performance is the arrival of Apollonia, a nineteen-year-old singer from New Orleans with nothing but some dreams and the Catwoman clothes on her back. Seriously, the girl travels 1,200 miles from New Orleans to Minneapolis and shows up without a suitcase. Also, in what universe does an African American singer in New Orleans decide that Minneapolis is the place to jumpstart a career? Well, fortunately for her, The Kid's number one rival, Morris Day, needs a sexy woman with a cool name for his own band. The Kid, on the other hand, just needs a sexy girlfriend with a cool name to terrorize, humiliate, screw and slap around.

Did I mention that The Kid, who's supposed to be the brilliant musician Prince, but not really, is also a moody, egotistical, selfish, preening asshole? Uh huh. Ostensibly, Morris Day is the film's antagonist. Mostly, though, he's just a vain jerk. The Kid is a piece of work. For a first date, The Kid orders Apollonia on the back of his purple motorcycle and drives off to a secluded lake. The initiation for new Minnesotans, he tells her, is to purify themselves by jumping into Lake Minnetonka. She strips (to the delight of straight men everywhere) and complies. "That ain't Lake Minnetonka," he grins. All is forgiven, of course, because he's a really good singer. Their second date is even better: he takes her to his place, the basement of his parents' house... that's decorated with masks and dolls. Ordinarily, this would make a guy seem uncool. Not to Apollonia. Then The Kid sets the mood by playing a recording of a woman crying, backwards. Ordinarily, this would make a person seem like a creepy serial killer who's going to make a vest out of your skin. But no, Apollonia is not creeped out. She's turned on. And they have sex. Later, to affirm his commitment to her, The Kid removes an earring and puts it on one of her ears. That's the least weird thing he does. And by the way, we're nearly an hour into this movie now and she's still wearing that same damn Catwoman outfit. She doesn't need an earring, she needs clothes.

In essence, Purple Rain is a dozen dynamic songs surrounded by a series of of alternately lurid or unrealistic scenes, all punctuated by terrible dialogue. There's a love story, some dysfunctional family drama and a little battle-of-the-bands action. When it's not about one of those things, it's a concert film. There may be a few grains of truth sprinkled in there, but not much of what happens between the music is remotely believable. Prince is a prodigious musician, producer and arranger; the Purple Rain soundtrack, an eclectic mix of rock, soul, funk and pop, is arguably a masterpiece. But whenever this film is not about the music, it's a bumbling, poorly acted, tonally discordant mess.

It's also just weird... really, really weird. When his Revolution bandmates express discontent about the fact that The Kid won't perform any of their compositions, he mocks them with ventriloquy. After a particularly scary altercation between The Kid's abusive father (a singularly first-rate Clarence Williams III) and his co-dependent mother ends with dad's tearful lament, "I would die for you," The Kid is inspired to write a dance track entitled "I Would Die 4 U." Simultaneously, The Kid worries that he might be turning into his father, a tortured musician who regularly browbeats and manhandles his wife. That would be an interesting thing to explore since The Kid treats his female bandmates like crap and knocks Apollonia around a couple of times. But this is Purple Rain, so no. You will just have to accept that the sensational mini-concert that takes up the film's final twenty minutes is exactly the right amount of music to soothe the savage drama queen living inside The Kid.

Stray Gay Observations: A boy named Richard sat behind me in the 4th grade. One day he leaned forward and whispered in my ear. "Queer." I instinctively knew it wasn't a compliment, but I liked the sound of it anyway. I'm queer. And I'm happy to have lived long enough to see that word re-enter the lexicon in a positive way. But back in the 1970s and '80s, it was de rigueur for critics and journalists to substitute androgynous when they really meant queer. Prince may be androgynous to some people, but he will always be queer to me.

Purple Rain's credits say, "Clothes by Louis and Vaughn Marie-France." And clearly their clothes budget was spent almost entirely on Prince and Morris Day. Throughout Purple Rain, Prince is always dressed like Prince -- ruffled shirts, high-heeled boots, ascots, those chic trench jackets and strikingly tight pants. Seriously, he wakes up in those pants. Morris Day's wardrobe is full of flashy, glittery jackets and insanely ostentatious shoes, or blindingly white overcoats and purely decorative walking canes -- he's what previous generations would have called a dandy, or a fop. Prince's wardrobe and styling pushed boundaries, mixing a masculine and feminine aesthetic about as successfully as it's ever been done. (Yes, even more so than David Bowie. Though to be fair, would Prince have been possible without Bowie?) Prince looks amazing, like some kind of horny, gender-bending, biker vampire. Morris Day just looks silly, which makes it all the more hilarious when he gets pissed-off and calls Prince a "long-haired faggot." 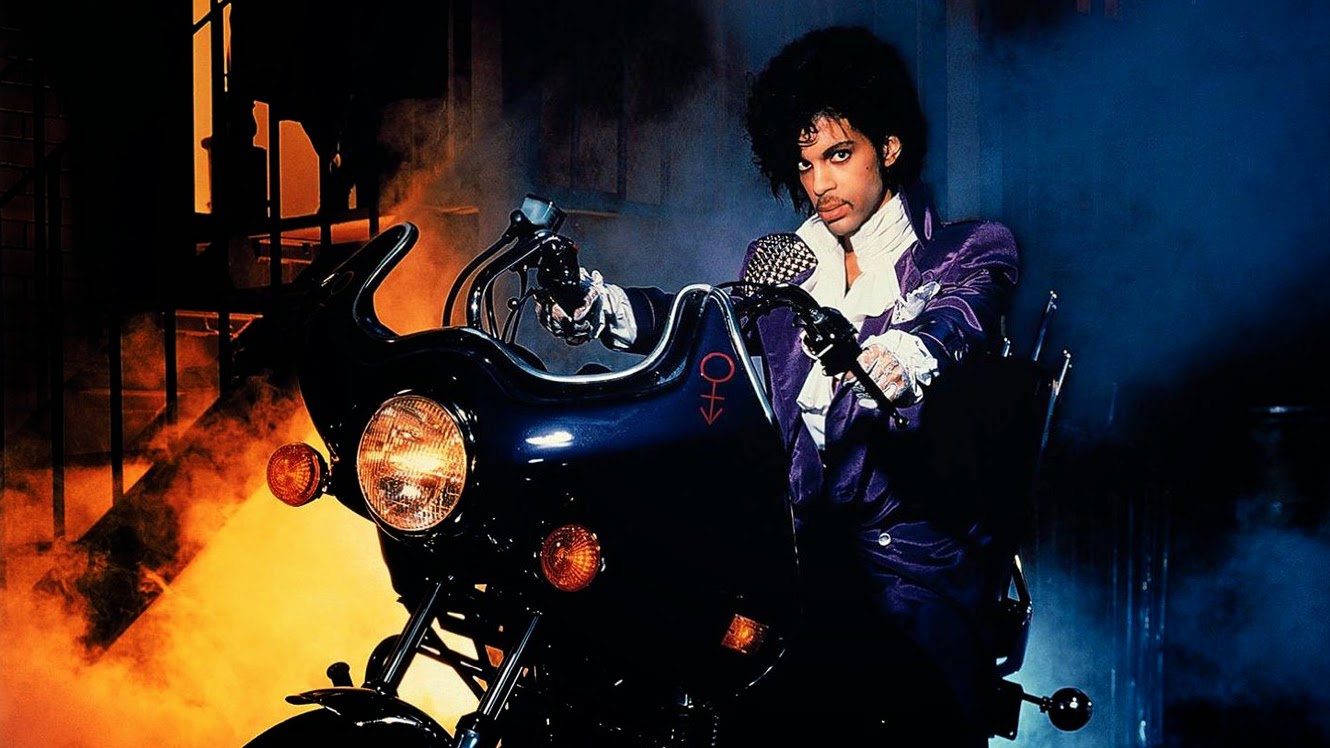 No one is going to remember Apollonia's clothes -- which mostly look like stuff Madonna dropped off at Goodwill in 1983. They'll just remember that scene where she removes them and jumps in a cold lake. In fact, she's rarely photographed in a way that emphasizes her wardrobe at all -- for the director, it's about her face and those breasts.


Prince has done some things that test my admiration for him (changing his name to an unpronounceable symbol and forcing us to call him "The Artist Formerly Known as Prince," for instance), but all is forgiven every time I hear "When Doves Cry," a stark, dramatically urgent pop classic. I can't think of another male artist who could write and then sound completely natural delivering these lyrics:


I was in a long-distance relationship with a native Minnesotan for three years (Hi, Greg!). There's no initiation that requires you to purify yourself by jumping in Lake Minnetonka. They make you go to the Minnesota State Fair, pet farm animals and eat cheese curds. I'm not kidding.

Something that never happened in the 1980s that should have happened: a Prince and Michael Jackson song collaboration, with a music video. I mean, these two guys owned the music charts in the '80s. The Purple Rain soundtrack spent 24 consecutive weeks atop the Billboard album chart; Jackson's Thriller spent thirty-seven weeks there. If someone had locked these two in a recording studio overnight, the outcome would have been either a fantastic record or a murder-suicide.

Should You See It? Purple Rain is filled with outstanding songs and some electrifying musical performances. The rest of it is so bad that it's accidentally fabulous.