What the Queer Cinephile Says: In 1962, writer and illustrator Jean-Claude Forest created the Barbarella character for a serialized science fiction comic strip published by a French magazine. The character and her sexually-suffused adventures proved to be so popular that the series was made into a stand-alone book in 1964. Characterized as the first "adult" comic (maybe in France, but not in the U.S.), it became a controversial runaway bestseller. 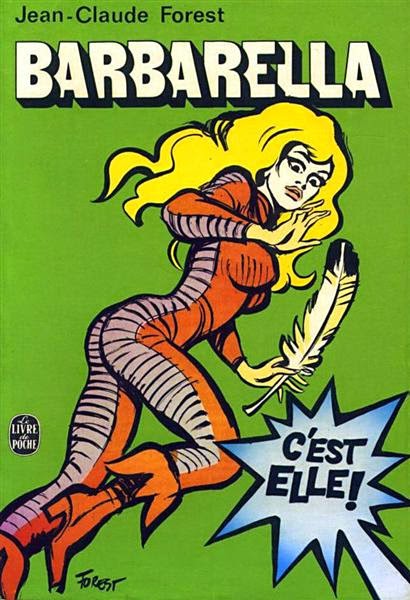 French filmmaker Roger Vadim, no stranger to provocative material (And God Created Woman, Blood and Roses), decided that Barbarella was adaptable for the big screen. He selected novelist and scriptwriter Terry Southern, best known for satirical works like Candy and Dr. Strangelove, to turn the comics into a film. But who would play the title role? With about a dozen films credits already, thirty-year-old Jane Fonda bore a discernible resemblance to the illustration -- and Vadim just happened to be married to her.

Set way in the future, Barbarella begins with a mesmerizing, four-and-a-half minute credit sequence in which the titular character does a weightless striptease inside her fur-lined spacecraft. She floats about rather seductively, shedding her stylish spacesuit completely as the names of everyone involved in the film drift and bounce around her. After restoring gravity with the push of a button (something that apparently did not occur to her four-and-a-half minutes earlier), Barbarella is immediately greeted by the President of the Republic of Earth, who pops up, Skype-like, on a screen and commences to recruit her for an important mission because she's a five-star, double-rated astronavigatrix. Also, she's still naked. The mission is to locate a missing scientist, Durand Durand, who's invented a Positronic Ray that has "the power to shatter the loving union of the universe." See, in Barbarella's future, "the universe has been pacified for centuries" and weapons are kept in the Museum of Conflict. Thus, Durand Durand must be located and his Positronic Ray disarmed in order to, as the president puts it, "preserve the security of the stars and our Mother planet." He sends Barbarella some futuristic-looking weapons via teleportation, and she accepts the interplanetary mission while standing there naked, holding a bunch of guns. It's an amusing image, and probably sexually arousing for at least a subset of heterosexual men out there.

With the help of her spacecraft's computer, the queerish sounding Alfie, Barbarella lands on Planet 16 in the Tau Ceti system -- Durand Durand's last known whereabouts. Emerging from her ship in a smashing new outfit, Barbarella encounters a variety of obstacles to her mission -- homicidal demon children, cannibalistic zombie dolls, bird attacks, and the Great Tyrant AKA the Black Queen of SoGo (Anita Pallenberg), a voluptuous leader with some overtly lesbian designs on our heroine. Fortunately, Barbarella has better luck with a furry huntsman (Ugo Tognazzi), a blind angel (John Phillip Law), and Dildano (David Hemmings), a resistance rebel leader who holds the key to accomplishing her mission. Naturally, she rewards all of them with sex, but the couplings are far more humorous than titillating.

Barbarella was released eight months after the crowd-pleasing original Planet of the Apes and six months after Stanley Kubrick's groundbreaking 2001: A Space Odyssey. This comic book-inspired sci-fi feature must have looked profoundly pointless after those seminal achievements. Even Fonda's nudity and the film's obvious espousal of America's late 1960's sexual revolution failed to draw crowds. Barbarella flopped. But like many other films, it was rescued from obscurity by the emergence of home video in the late 1970s; the rest is cult movie history.

Besides Terry Southern, seven other men are credited with collaborating on the Barbarella script -- and yet it still feels like the cast made a lot of it up on the spot. There are witty lines and copious amounts of deliberate camp, but the ambitiously silly sets and exaggerated costume design are funny, too (though the laughs they evoke now are probably unintentional). Roger Vadim's direction is pretty perfunctory; he seems motivated mostly by a rampant desire to flaunt Jane Fonda or the production design. Those pre-CGI, artsy craftsy sets are never dull, but your eyes will always be drawn back to the virtually luminous Fonda. In her 2005 autobiography, Fonda says she wasn't interested in Barbarella, taking the role only because husband Vadim adamantly insisted. The resulting collaboration is absolutely fascinating. Vadim persistently and clumsily stages scenes to emphasize either her face or body -- his directorial priorities are clear, and primarily serve the interests of hormonal 15-year-old heterosexual boys. But I see an undercurrent of willful mockery beneath Fonda's doe-eyed, sex-kitten-in-outer-space performance; she knows this is nonsense at best, exploitation at worst. Still, after decades of ignoring the film's existence, she finally acknowledged the appeal of Barbarella, conceding that it's a film with unique charm.

Stray Gay Observations: Okay, I'll argue that Barbarella was ahead of its time. In the 1930s, Americans could catch short, serialized black and white B-movies about Flash Gordon. Then, Batman, Superman, Green Hornet and Captain America hit theaters in the 1940s. By the 1950s, superheroes had peaked and American audiences could choose from a more diverse menu of big screen science fiction -- flying saucers, body snatchers, radioactively-enlarged bugs, all-consuming blobs and monsters from beneath the sea. So, unless I've missed something, Jane Fonda was the first woman to play the indisputable lead in a science fiction movie of any kind, ever -- and her superpowers appear to be resourcefulness, sex appeal and extraordinary fashion sense.


I love the fact that whenever Barbarella encounters someone on Planet 16 that doesn't speak English, her first inclination is to try French.

For me, one of the film's highlights is an extended cameo by David Hemmings (1941-2003) as Dildano, the leader of a resistance force that also wants to thwart the Great Tyrant. He's the closest thing we get to a conventional male hero in Barbarella, but his sexually suggestive name implies that he's not the real thing. He can't even have sex with Barbarella unless he pops a pill. So, you have that terrific ribald name and an accidental prediction about the future treatment of impotence. Dildano does not save the day, but David Hemmings has a blast playing this decidedly inept character.

Barbarella's love theme was written by Bob Crewe and Charles Fox. It rhymes Barbarella with psychedella. Psychedella, incidentally, is not a word. It is, however, someone's Twitter account. Bob Crewe also gave the world "Lady Marmalade," a hit for Labelle in 1974, then successfully remade by Christina Aguilera, Lil' Kim, Mya and Pink in 2001. Bob Crewe makes the drag queen in all of us very happy. And thanks to him, we all know how to say "Do you want to sleep with me tonight?" in French: "Voulez-vous coucher avec moi ce soir?" The remainder of Barbarella's musical score was written by Charles Fox and it alternates between impossibly sunshine-y funk and some kind of faux-acid rock. If you'd like to know what else Mr. Fox was capable of, listen to the theme music for TV's Love American Style and The Love Boat.

Should You See It? I suspect sci-fi purists probably won't appreciate how mercilessly Barbarella tweaks the genre. And folks that hate Fonda for her politics and public activism will not be amused, either, but it might be cathartic for them to watch the DVD and spend 98 minutes cursing and spitting at the screen. I invite everyone else to consider this: "It's a special kind of mess," wrote New York Times film critic Renata Adler in her 1968 review of Barbarella. She also called it "a bit of cosmically spiteful chaos in an interior decorator's salon, space, or a cosmetics factory." I agree, even though I know Ms. Adler was not being complimentary. You should see it, not avoid it, for those reasons.