Although kazaky is Ukrainian for "Cossacks," the revolving members of this group claim their name has nothing to do with Russian history's self-governing military communities, but is rather a derivative form of the Japanese word Kazaki, a popular name for boys in Japan. Personally, I'd have gone with the Cossack thing. Anyway, they gained attention outside the Ukraine back in 2012 after appearing as backup dancers in Madonna's video for "Girls Gone Wild." They aren't just dancing. They're dancing in heels. Stiletto heels. In one of their more recent videos -- below -- they have some fun fusing hyper-masculine and feminine fashion together.


Ke$ha & The Veterans. Four men who served in the armed forces -- Mat, Jarred, Rocco and Derek -- were looking for a way to acknowledge Veteran's Day 2014 and promote their clothing line, Article 15. The solution? A lip dub video shot in a car. The twist? Rapper/singer/songwriter Ke$ha pops up from the back seat to pick the song -- "Your Love Is My Drug," her 2010 hit. And then they all make complete fools of themselves.

Turns out he's pretty frisky and talented outside the bedroom as well. In his spare time, D.O. and some friends put together a funny, sexy parody of "All About That Bass," Meghan Trainor's 2014 funky pop hit. This is no lip dub -- it's a brand new recording of the song. I can probably get you to watch this just by letting you know he strips down to his underwear, but the whole endeavor is giddy indulgence. Deviant Otter has some moves. And he can twerk.

The Beards of Modern Music, Vol. 3

There's a facial hair renaissance going on out there, folks. This series is all about the bearded men who make music. Check out the fuzz and stubble, but stick around for the sound.


The Timbers. They're four men from Down Under -- Simon Basey, Benjamin Roberts, Kyle Vause, Joe Murphy --  who describe their sound as "Raucous Alternative High Energy Modern Australian Folk." Find out more on their website, Facebook page or YouTube channel.


Song & Video: "Mean Streak." Catchy, rambunctious as hell, and I bet they have you singing the refrain before it's over. The video is a great example of what a good imagination can do with a low budget.


Synoptix. It's the musical project from a trio of dudes out of Yekaterinburg, Russia. The sound -- a satisfying evolution from their 2010 debut album -- is a blend of beatbox, electronics and electric guitar. Think rock infused with hip hop, funk and lounge. Disarming but gutsy -- and vocalist Alexey Bobylev is my current music man crush. They're recording new tracks as I write this, so -- fingers crossed -- there'll be a new album this year (or they'll release the singles, at least). For now, there's more music on their YouTube channel.


Song & Video: "I Had a Soul." It's an impeccably arranged breakup tune that puts Bobylev's voice up front. Shot on a makeshift stage in an art gallery, the video is a live performance that captures the band's enthusiasm and skill, as well as Bobylev's impressive vocal range.


Carl Espen. At 17 he won a local singing competition and started to believe a career in music was possible. Sidetracked by military service and a day job in the glass business, it wasn't until he was 31 that he got an enormous break: Mr. Espen was Norway's 2014 Eurovision Song Contest entry with a genuinely intimate and evocative ballad called "Silent Storm." Written by his younger cousin, Espen took the song into the Top 10. Post-Eurovision, looks like he might get a shot at that career after all. Check out his website here.


Song & Video: "Holding On." The tune feels personal, touching on a universal theme: knowing when it's time to let go in a relationship and move on. The lovely plaintive quality of Espen's voice suits it perfectly. Sounds like a downer, right? Nah, it's sneakily hopeful. The video was shot in Oslo, Norway, a city you rarely see represented in pop culture. But the real draw is Carl Espen. The man has a presence; he doesn't need to wave his arms or beat his chest to hold your attention.


Wanna see the first two volumes in this series? Click on either link below.

Email ThisBlogThis!Share to TwitterShare to FacebookShare to Pinterest
Labels: beard renaissance, bearded musicians, bearded rockers, Carl Espen, Holding On, I Had a Soul, Mean Streak, Synoptix, The Beards of Modern Music, The Timbers

The Sound of Queer Music, Vol. 5


The Chew Toys. Formed in 2012, they're a California queercore duo who promise to "get you drunk, singing and deaf." Don't know what queercore means? Think homopunk garage rock 'n roll. In late 2014, drummer/vocalist Jay Tag told music website CMJ that he and bandmate Kevin Dickson bonded over "a silly idea to get drunk and write songs about our friends and take the piss out of stuff." Guitarist/vocalist Dickson adds, "However, as a gay dude, if I'm gonna write a song that's sexy, it's gonna be about a guy. We set out to have those same dumb sex songs like Kiss had on Rock & Roll Over, but about guys. It's not a gimmick, it's how I'd write about sex." Oh, and they're married. To each other. Bet you didn't see that coming. They're self-titled debut album was released in late 2014. You can hear the songs on Soundcloud and purchase the album (vinyl or digital) on their website. To read the entire CMJ interview, go here.


Song & Video: "Leather Sweater." According these guys, the song "is about being so hot for a guy you want to basically tear him apart." The video is an endearingly low-budget psychedelic kick.

Brett Gleason. He was asked to describe himself in a 2012 interview with PopCultureZ: "I'm a solo artist from Brooklyn -- I play piano, manipulate electronics and take my shirt off." He's also gay and candidly open about being bi-polar. As his official bio suggests, "Gleason knows what it's like to live a life of intensity outside the mainstream and his music reflects this." The sound is raw and intimate with a palpable melancholy, but it's simultaneously vigorous, progressive and unabashedly theatrical. In other words, Gleason's work defies pop conventions and really challenges the listener. His self-produced, self-titled debut album was released mid-2014 and is available on his website or iTunes. (All the amazing lyrics are on his website, too.)


Song & Video. "I Am Not." Gleason describes the song as a kind of mantra: "It started as something I'd repeat to myself when I felt overwhelmed or hopeless -- an assertion that reminded me I've been through worse and have proven stronger than I ever hoped." The video -- his first, filmed with friends in late 2009 -- is an eerie little murder mystery filmed in his grandmother's Connecticut backyard.

Top Less. This promising Canadian band released their debut album in 2013 -- and with a name like Top Less Gay Love Tekno Party it was bound to draw some attention. The sound is a brash amalgam of electro, dance and glam pop; their live shows are vibrant and theatrical, featuring props, costumes, video projections and -- shudder -- glitter. In a 2013 interview with The Lab Magazine, Top Less co-founder Mike Shindler said: "I would say our shows and music are an acknowledgment of the absurdity of many aspects of human life and then lighting the wick and hoping for an explosion." You can check out their website here.


Song & Video: "Danger Love." The song is about those early stages of love, when hearts are tender and vulnerable. Building to something almost anthemic, it soars and swirls and becomes unexpectedly exhilarating. For the video, Top Less essentially answers the question: What does an unabashedly theatrical band do in the woods? They become pixies or tree spirits or sprites... or something... and dance (well, it's actually a form of interpretive movement called Eurythmie). Oh, and they summon some kind of Christ-like figure. Honestly, I have no idea what they're doing here, but it's awesome. And so is the song. 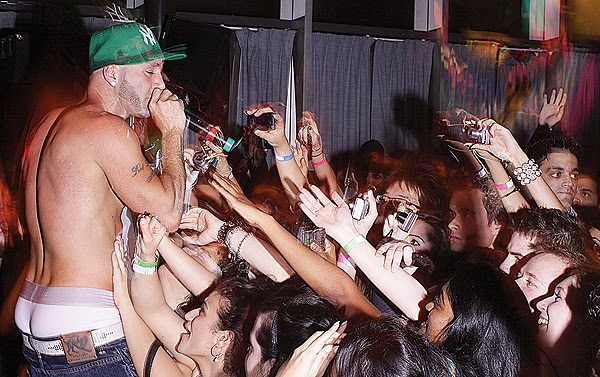