The Sound of Queer Music, Vol. 9

PRAYERS. Formed in 2013, this San Diego cholo-goth duo is Leafar Seyer (backwards stage name for Rafael Reyes) and Dave Parley. What is cholo-goth? "Cholo" has various meanings, typically referring to Hispanic males. Embracing goth,  Seyer and Parley integrate the harsh realities of gang and street life with throbbing beats and swirling synthesizers. And it works. For more about this duo, there's a good LA Weekly article here. All their music is on iTunes. 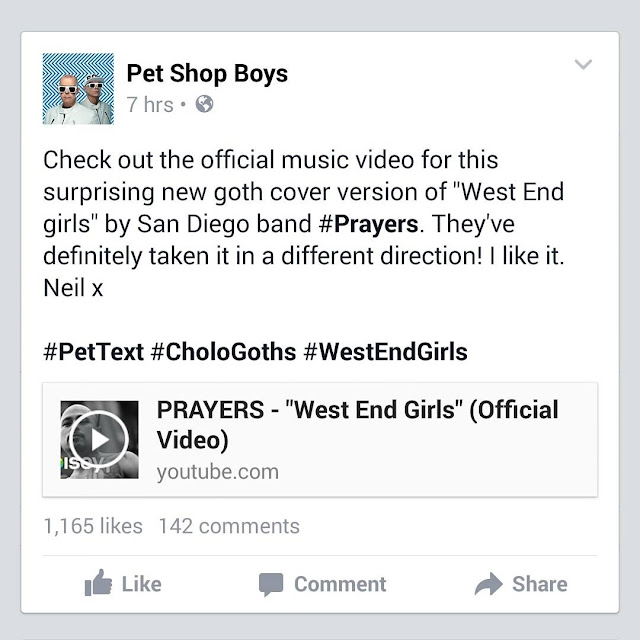 The video is a super-stylized, slo-mo black and white affair, filled with an eclectic cast of characters just chilling in a graveyard.

Huntington. This Hamburg based duo consists of vocalist/producer Scott Huntington (from Australia) and producer/engineer Dustin Ibrahimoglu (from Germany). The sound is synth-pop with a nice little edge. Their 2015 EP -- Secret -- is available on iTunes.

Song & Video: "Secret." It's a groove that invites you to grind. The simple, engrossing video is a snapshot of infidelity that plays out in reverse and delivers an unexpected twist.


AB Soto.  He's a Mexican-American who grew up in East Los Angeles with colliding passions for music, fashion and dance. His sound -- an amalgam of rap, house and dance -- is frequently influenced by his Latin heritage, but he sums up his work as performance art. In May, 2015, he told The Huffington Post: "I'm playing around with costumes. I'm playing around with masculinity, femininity. I'm playing around with styles of music that, you know, in the past have only been for straight people or a specific race -- whether it's rap, whether it's house, whether it's salsa." You can read the entire profile/interview here. His music is available on iTunes. Check out his YouTube channel here.

Song & Video: "Cha Cha Bitch." It's a boisterous dance floor invitation. And the video is a glittery little spectacle to behold.