Munch's Scream and The 3-Second Rule, Among Other Things

Among other things I found online this week...

The Scream. One of the most recognizable paintings in the world has been sold at auction through Sotheby's. The Scream, Norwegian artist Edvard Munch's vivid expressionist depiction of psychological anxiety (or angst, depending on who you ask), sold for the record-breaking sum of nearly $120 million dollars. Considered priceless by many, the pastel on board work was expected to fetch around $80 million, but it easily surpassed the previous record for an artwork sold at auction --  $106 million for Picasso's Nude, Green Leaves, and Bust in 2010. 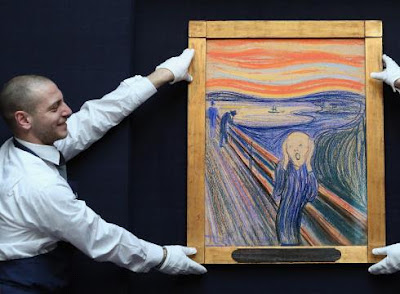 There are four versions of the painting -- three hang in Norwegian museums and this was the last one privately owned. So who bought The Scream?  Sotheby's is not disclosing that information, but Chinese billionaires are dominating the art world these days. So what does a Sotheby's auction look like? This short clip provides a glimpse of the process.

The artist, Edvard Munch (1863-1944), never married but is alleged to have had a number of heterosexual affairs. There's been some speculation but no confirmation that he was gay, very likely because his nude works feature women and men. He painted The Scream in 1893 and this is his explanation for creating the iconic painting.


"I was walking down the road with two friends when the sun set; suddenly, the sky turned red as blood. I stopped and leaned against the fence, feeling unspeakably tired. Tongues of fire and blood stretched over the bluish black fjord. My friends went on walking, while I lagged behind, shivering with fear. Then I heard the enormous, infinite scream of nature."

Yeah, I can relate. Incidentally, here's what he looked like... 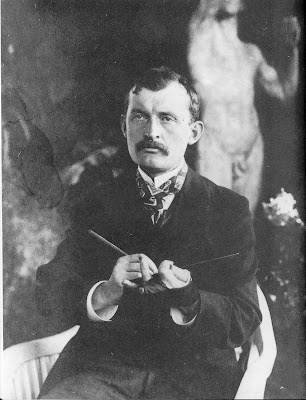 3 Second Rule, 15 Minutes of Fame. Now for something completely different to get the bitter taste of Bryan Fischer out of our mouths. Here's singer/songwriter Lisa Gail Allred, a Texas native who's been singing since she was a child. In the last two weeks, the homemade video for her country/pop song "3 Second Rule" has gone viral, because it's unintentionally hilarious and she sings like those people who get roundly rejected during the auditions portion of American Idol. It's got hot cowboys, camel toe (at 1:26) and vocal nirvana (at 2:34). Haters gonna mock, but it's maddeningly catchy as shit. And who can blame her for pursuing a dream? I just hope she makes some money from all the fun covers already turning up on YouTube.

My Favorite Music Video(s) of the Week. First up is the clip for "Wandering Sailor" by Brooklyn-based duo Kingship (Paul Leschen and Chris Hall). For their first ever video they've delivered a dreamy, sexy homage to the little-seen 1982 foreign film Querelle. The song is a pretty solid retro-rocker with great vocals (okay, his voice may be an acquired taste), and the video is just the right mix of tongue-in-cheek camp -- though you may have problems with the ending; I didn't.


And this is B.A.P.,  a South Korean hip hop boy band (yup, that's a thing). Their name stands for Best Absolute Perfect. The song is called "Power" and the video is a giddy, expensive, elaborately choreographed spectacle featuring a crashed spaceship and aerosol spray cans. It's all kinds of wonderful terrible.